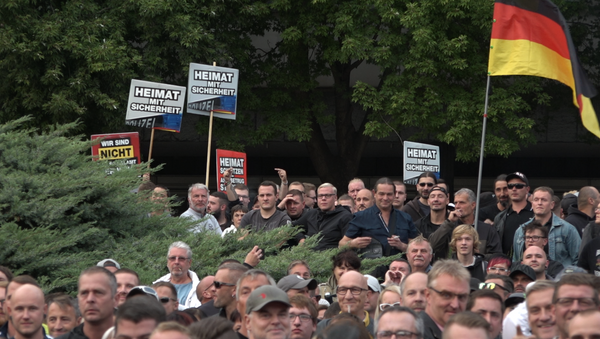 CHEMNITZ (Sputnik) - Unprecedented security measures have been introduced on Thursday in the city of Chemnitz in Germany's Saxony ahead of the meeting between Prime Minister of Saxony Michael Kretschmer and the city residents who had joined anti-immigrant protests on Sunday and Monday.

Shops and cafes near the local football stadium, which will serve as the venue for the meeting later in the day, are closed, roads leading to the city train station are blocked and traffic lights are turned off. Residents have sealed off their gates.

On Sunday morning, a 35-year-old German man was fatally stabbed allegedly by a 23-year-old Syrian and a 22-year-old Iraqi who were arrested on suspicions of murder.

German Chancellor Angela Merkel condemned the protests and said that there was no place for "hate in the streets" in Germany.

'No Point In Talking'

Most of the people whom Sputnik correspondents tried to interview refused to talk to the press. "I see no point in talking" and "We won't talk to the press" were the most common responses obtained by Sputnik in the streets of Chemnitz.

Anti-Migrant Protests In Chemnitz, Germany Amid Visit of Saxon PM
Out of the ten to whom the correspondents managed to talk, none expressed willingness to attend the meeting with Kretschmer.

"We won't tell a word to you. You will twist everything anyway. Watch the news, watch the TV, it is a conspiracy," an owner of a small shop close to the stadium told Sputnik.

The shop had no lights on and no visitors.

'We are all Far-Right Here'

"I would like to go to the meeting with the prime minister, but I am scared. You have probably read that left radicals are planning to come here today to fight the right ones. I am not afraid of the right. We are all right here. I am right myself," one of the residents who lives near the stadium told Sputnik.

The woman said that if it were not for the right, the residents would not be able to leave their homes.

"Everything that these so-called migrants are doing here is just awful. But nobody will write about it. And neither will you. And don't believe that the right have beaten somebody. They are harmless, we know them," the woman added.

'Nobody Will Be Deported'

"I won't go to the meeting with the prime minister, I have no time. And no questions," another Chemnitz resident told Sputnik on conditions of anonymity.

The woman called to the correspondent's attention several dozen police buses parked in front of the stadium.

EU Must Set Up External Centers to 'Sort Out Migrants From Terrorists'
The Chemnitz unrest once again revealed the thorny issue of the government's response to immigration in Germany.

In 2015, the country took in over one million refugees amid the European migration crisis as part of what Merkel called an "open-door policy." Ever since, multiple reports have attributed responsibility for gruesome murders and rape cases to immigrants and asylum-seekers living in Germany, provoking a vigorous public outcry over Merkel's immigration policy and igniting a row that has threatened to break up her coalition government.