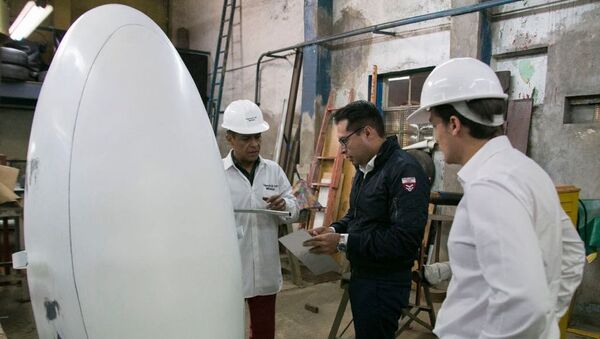 Almost a year after the earthquake of September 19, 2017, Mexican scientists have created a device that could save you from disaster. It’s the K107 capsule, which is able to resist the collapse of a building and provide survivors with oxygen, water and food for up to 30 days.

Sputnik talked to Reynaldo Vela, the engineer who created the K107. The idea of a capsule that can detect seismic activity and protect people was born eight years ago at Mexico’s National Autonomous University in Azcapotzalco.

“Originally there was virtual testing of more than two thousand geometric figures and so we decided on the egg-like shape. From that point on, with the help of a paleontologist, we started studying the different types of eggs until we chose the shape of a velociraptor egg, which is perfectly symmetrical and convex at the poles. This is how the K107 appeared,” the researcher told Sputnik.

According to the engineer, another advantage of this model is that it can grow in size while remaining symmetrical, thus keeping the balance. They designed a meter-tall capsule for children and 2.10-meter one for adults.

“A person can easily fit into the capsule and it’s really comfortable inside,” Reynaldo Vela, winner of Mexico City’s Engineering Award of 2009, said.

Three People Killed, Over 310 Injured in Earthquake in Iran - Reports
The K107 capsule is built with high-strength aerospace material and is connected to the earthquake warning system to keep the survivor informed about the details of the tremor.

In addition, if the capsule is trapped under the rubble, there’s enough oxygen, water and food for 30 days. The K107 is equipped with a GPS module so emergency services can find it and save the people.

The ”shell” of the capsule is a kind of a material ”sandwich” where each layer is resistant to different impact types, such as tension, bending or shear. So, we can say that the K107 is resistant to any natural disaster, be it an earthquake, flood, tsunami or landslide.

London’s Fault: Geologists Find UK Capital at Risk of Serious Earthquake
The capsule was presented in 2017 at the Italian Space Agency’s headquarters at the invitation of the United Nations.

The team has already received a patent and demand for the K107 has soared in Mexico, the US, Canada and Chile.