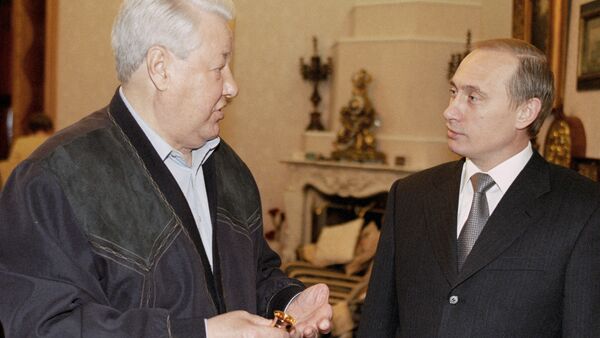 © Sputnik / Vladimir Rodionov
/
Go to the photo bank
Subscribe
The US side did not discuss with Moscow the release of a phone call transcript dated 1999, which showed that Russia's then-President Boris Yeltsin introduced Vladimir Putin to his US counterpart Bill Clinton as the next leader of the country, Kremlin spokesman Dmitry Peskov announced on Friday.

"No, it was not agreed, no consultations were held," Peskov told reporters.

In a phone call transcript dated September 8, 1999, Yeltsin told Clinton about his future successor ahead of the US president's meeting with Putin. "I am very much convinced that he will be supported as a candidate in the year 2000. We are working on it," Yeltsin noted.

Almost 600 pages of transcripts from 18 personal conversations and 56 telephone conversations between Clinton and Yeltsin were released by the Clinton Presidential Library in Little Rock, Arkansas last month.

On Alleged Putin's 'Threat' to Poroshenko

"No, I attended nearly all talks, I did not hear such a phrase," Peskov told reporters when asked to comment on Hollande's memoirs, which said Putin had allegedly told Poroshenko Russia could crush the Ukrainian army.

The presidential spokesman said Putin was ready to support Russians in any country.

"Putin always takes a very tough unequivocal stand in terms of supporting the Russian population where it may be subjected to hostile actions, often bordering on genocide, attacks by ultranationalists, etc. This is the consistent policy of the Russian president, he supports Russians anywhere in the world," he said.