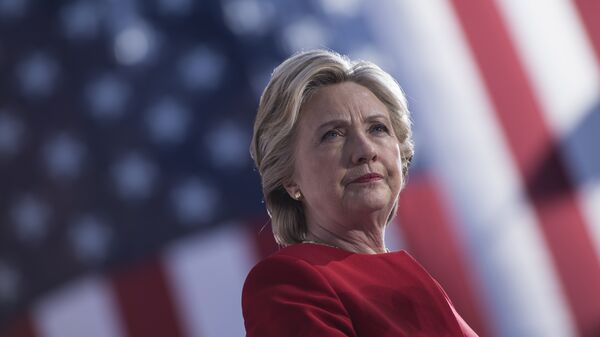 © AFP 2023 / Brendan Smialowski
Subscribe
International
India
Africa
Ekaterina Blinova
All materialsWrite to the author
A battle royal is about to erupt, Wall Street analyst Charles Ortel told Sputnik, commenting on The Daily Caller's report that ex-Secretary of State Hillary Clinton's private server was hacked. According to Ortel, the Clinton email case deserves further scrutiny despite the FBI's denial of the alleged intrusion.

The FBI has rebuked Donald Trump's tweet saying that Hillary Clinton's unsecured email servers were reportedly accessed by Chinese hackers; however, the agency has not yet clarified the point whether or not it had been informed by the Intelligence Community Inspector General about foreign intrusion of Clinton's private server back in 2015.

Hillary Clinton’s Emails, many of which are Classified Information, got hacked by China. Next move better be by the FBI & DOJ or, after all of their other missteps (Comey, McCabe, Strzok, Page, Ohr, FISA, Dirty Dossier etc.), their credibility will be forever gone!

FBI Refutes Clinton's Private Server Was Hacked By China
He broke the news about the alleged Chinese intrusion on August 27, citing two sources informed on the matter. According to The Daily Caller's interlocutors, a Chinese firm embedded a malicious code into Clinton's private server and gained access to virtually all ex-secretary of state emails, including top secret government documents.

Earlier, during a July hearing with FBI official Peter Strzok, Republican Rep. Louie Gohmert of Texas pointed out that the government watchdog had found that nearly all of Clinton's emails were send to a "foreign entity," adding that it was "unrelated to Russia." He further said that the ICIG presented the finding to FBI agent Strzok, but that the latter had apparently swept the valuable information under the rug.

​Still, the FBI insists that its former chief James Comey had not found any traces of foreign intrusion while investigating the Clinton email case from 2015 to 2016. China has also denied the alleged hacking of Clinton's private server.

Speaking to Sputnik, Charles Ortel, a Wall Street analyst and investigative journalist who has been looking into potential fraud cases involving the Clinton Foundation over the last few years, expressed confidence that the truth would find its way out.

No One Has Ever Been as Sloppy as Clinton While Handling US Top Secrets – Writer
One of the reasons behind the FBI's apparent unwillingness to confirm or deny whether it was briefed by the ICIG on the matter "may be that there is an active investigation ongoing," the analyst suggested.

Having referred to the publicly available FBI vault documents concerning Clinton's "emailgate," he explained that "the FBI has specific procedural requirements for all kinds of investigative work and maintains extensive records beyond those available to the public."

"These records should explain what truly happened with the FBI investigation that was opened on July 10, 2015 by a report issued July 6, 2015 when Intelligence Community Inspector General McCullough issued his findings," Ortel presumed.

According to the investigative journalist, it looks rather strange that ex-President Barack Obama and the Democratic Party pushed Clinton's candidacy hard, although the Clinton email scandal erupted in March 2015, a month before she threw her hat into the ring.

Clinton Saga Continues: Watchdog Publishes New Batches of Hillary’s Emails
It was found out that the former secretary of state had used private unsecured email servers to conduct government business from 2009 to 2013 and handed a larger part of her emails over to the State Department only in 2014, reportedly withholding about 30,000 emails.

According to Ortel, it was similarly surprising that some FBI officials had apparently turned a blind eye to the ICIG's damning findings in 2015.

"In July 2015, many in the FBI and likely many in the Obama Administration knew that Hillary Clinton had serious outstanding 'issues', yet Barack Obama and Democrats pushed her candidacy hard, including letting her 'rig' the primaries in her favor, beginning with a formal agreement through law firm Perkins Coie giving her campaign special privileges," he underscored.

It appears that "one reason Obama and Democrats did this is that the Clintons had even more damaging information on the Obamas and their allies that all agreed would be kept hidden through, and after a Hillary Clinton victory in November 2016," the journalist presumed, adding that Trump's win had obviously spoiled their supposed game and paved the way for potential large-scale exposure.

Ortel has drawn attention to the fact that US mainstream media and NGOs, including Media Matters, backed by liberal billionaire George Soros, vehemently denied the alleged hack of Clinton's private server by a foreign entity, labeling it as "fake news" and "conspiracy."

"Soros, Media Matters and many other left-leaning 'charities' that are either improperly organized or partisan 'political action organizations' have much to lose once President Trump gains full control over the Justice Department and the IRS," he said. "As a guess, Media Matters and Soros are attacking to muddy the waters in the public's mind, thereby delaying the now inevitable prosecutions as long as possible."

Besides, the potential exposure of the Clinton Foundation's alleged fraud is still hanging above the heads of Hillary and Bill Clinton like the sword of Damocles, Ortel remarked.

'The Minute Clinton Set Up Her Private Server to Conduct Gov't Business, It Was Crime'

#DrainTheSwamp- @SidneyPowell1: The minute Hillary set up her private email server to receive govt emails, it was a crime. This should’ve been investigated & should still be investigated. DOJ & FBI have done nothing but run a massive cover-up operation. #MAGA #TrumpTrain #Dobbs pic.twitter.com/dP5zqVuR66

​"Sidney Powell is a brave and wonderful person who is absolutely correct," the analyst underscored, referring to 18 US Code 793.

"Here it is important to note that certain subparagraphs starting with (c) appear not to require that persons breaking the law have 'intent'," he elaborated. "Considering the known record, I believe that Hillary Clinton, her associates, and whoever may have approved the absurd arrangements to let 100 percent of State Department business be conducted using private servers and non-secure electronic devices have exposures assuming fair reading of the statute."

Ortel believes that many parties inside and outside the US know "important truths regarding the gross criminal activities of the Clintons and their allies." It appears that the Trump administration is "preparing ground for prosecutions of these corrupt Deep State actors."

"The stage has been set for many months, and I fully expect a battle royal to erupt whose resolution will have historic consequences around the world, not simply inside America," the Wall Street analyst concluded.