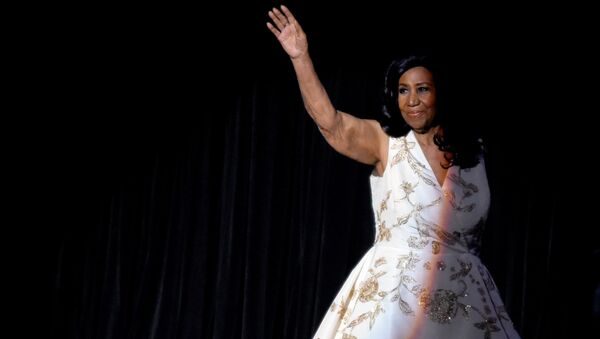 © AFP 2021 / Noam Galai / GETTY IMAGES NORTH AMERICA
Subscribe
Family and friends of Aretha Franklin gathered at the Greater Grace Temple in Detroit, Michigan, on Friday to pay their final respects to the one and only Queen of Soul.

Filled with personal stories and light-hearted jokes about the Memphis-born singer, the funeral service saw performances from the likes of Ariana Grande, Faith Hill, Fantasia, Jennifer Hudson, The Clark Sisters, Stevie Wonder and Chaka Khan, among others.

Outside the ceremony, a row of pink Cadillacs lined the street, giving a nod to the Queen's 1980s hit song "Freeway of Love."

​And at the entrance, floral arrangements sent in by Diana Ross, Tony Bennett and Barbra Streisand greeted guests, Variety reported. The words "A Celebration Fit for the Queen" were reportedly projected above Franklin's golden casket.

Jackson, who came up to the podium following Khan's rendition of Walter Hawkins' "Going Up Yonder," spoke on Franklin's part in the Civil Rights movement, recalling a time when she performed at a benefit concert despite police dispersing tear gas.

"Aretha was our queen; she belonged — and belongs — to us," Jackson said, before highlighting the need for voters in Detroit to do their part and show up to vote. "We have long lines for death and short lines for voting — we lost Michigan by 11,000 votes; 100,000 [people] unregistered [to vote] in Detroit."

As the service progressed, US President Donald Trump, who was not invited to the event, was even mentioned in Georgetown professor Michael Eric Tyson's speech. "This orange aberration had the nerve to say Aretha worked for him. You lugubrious leach. You lethal liar. You dimwitted dictator. You foolish fascist. She didn't work for you. She worked above you. She worked beyond you. Get your composition right," he said.

But of the dozens of guests in attendance, actress Cicely Tyson scooped up some of the most attention on social media, with netizens zeroing in on her Franklin-approved church hat.

​​Aside from the glory that is Ms. Tyson, a longtime friend of Franklin, netizens pounced on the highs and lows of the service, dishing the shade that auntie Aretha would've (likely) approved.

​Some of the lows of the service revolved mostly around the eulogy offered by Rev. Jasper Williams, who suggested that women are unable to raise men on their own; Franklin raised four boys.

​Franklin died earlier this month at the age of 76 after a battle with pancreatic cancer.

000000
Popular comments
As the service progressed, US President Donald Trump, who was not invited to the event, was even mentioned in Georgetown professor Michael Eric Tyson's speech. "This orange aberration had the nerve to say Aretha worked for him. You lugubrious leach. You lethal liar. You dimwitted dictator. You foolish fascist. She didn't work for you. She worked above you. She worked beyond you. Get your composition right," he said. Now that's a professor with a nice turn of phrase. ;)
michael
1 September 2018, 02:40 GMT
000000
Newsfeed
0
New firstOld first
loader
LIVE
Заголовок открываемого материала
Access to the chat has been blocked for violating the rules . You will be able to participate again through:∞. If you do not agree with the blocking, please use the feedback form
The discussion is closed. You can participate in the discussion within 24 hours after the publication of the article.
To participate in the discussion
log in or register
loader
Chats
Заголовок открываемого материала
Worldwide
InternationalEnglishEnglishMundoEspañolSpanish
Europe
DeutschlandDeutschGermanFranceFrançaisFrenchΕλλάδαΕλληνικάGreekItaliaItalianoItalianČeská republikaČeštinaCzechPolskaPolskiPolishСрбиjаСрпскиSerbianLatvijaLatviešuLatvianLietuvaLietuviųLithuanianMoldovaMoldoveneascăMoldavianБеларусьБеларускiBelarusian
Transcaucasia
ԱրմենիաՀայերենArmenianАҧсныАҧсышәалаAbkhazХуссар ИрыстонИронауОssetianსაქართველოქართულიGeorgianAzərbaycanАzərbaycancaAzerbaijani
Middle East
Sputnik عربيArabicArabicTürkiyeTürkçeTurkishSputnik ایرانPersianPersianSputnik افغانستانDariDari
Central Asia
ҚазақстанҚазақ тіліKazakhКыргызстанКыргызчаKyrgyzOʻzbekistonЎзбекчаUzbekТоҷикистонТоҷикӣTajik
East & Southeast Asia
Việt NamTiếng ViệtVietnamese日本日本語Japanese俄罗斯卫星通讯社中文（简体）Chinese (simplified)俄罗斯卫星通讯社中文（繁体）Chinese (traditional)
South America
BrasilPortuguêsPortuguese
NewsfeedBreaking
22:39 GMTEx-Algerian President Abdelaziz Bouteflika Reportedly Dies Aged 84
21:51 GMTAct of Sabotage Results in Power Outage in Damascus, Energy Minister Says
21:35 GMTOld Friends Are Not the Best?
21:08 GMTMilley Assured Pelosi That US Military, Not Trump, Controlled the Nukes, Vice Chairman Says
21:05 GMTFed. Chief Powell Orders Sweeping Ethics Review Amid Trading Scandal at Federal Reserve
20:38 GMTBiden to Convene COVID-19 Summit on Margins of UN General Assembly
20:30 GMTFootball Legend Pele 'Rushed Back' Into Intensive Care Days After Colon Cancer Surgery
20:21 GMTRussia Possesses ‘Unbelievable Military Power’ After Transforming Forces, US General Says
20:20 GMT‘Irony of Historical Proportions’: Iran Ex-FM Zarif Muses on US Deal to Sell Australia Nuclear Subs
19:47 GMTPrince Andrew Has a Week to Challenge Court Ruling to Serve Papers Amid Procedure Disagreements
19:43 GMTFDA Panel Votes Against Offering Pfizer Booster Shots for COVID-19 to Most Americans
19:37 GMTFrance Recalls Ambassadors From US, Australia for Consultations over AUKUS Alliance
19:34 GMTUS Prosecutors Reportedly Plan to Charge Ex-Boeing Employee for Concealing Truth About 737 MAX
19:28 GMTAlt-Right Proud Boys Warn Members to Avoid 'Trap' of Washington DC Rally
19:18 GMTTrump Sends Letter to Top Georgia Officials Demanding to End 'Illegitimate' Biden's Presidency
19:18 GMTTaliban Reportedly Ditches Women's Ministry in Favour of 'Ministry of Virtue and Vice'
19:09 GMTUS Gen. McKenzie Admits Kabul Airstrike 'Was a Mistake', Killed Only Afghan Civilians
19:07 GMTPresident Trump’s Dismissal of Bill Barr’s Warnings Cost Him Presidency, Book Claims
19:03 GMTDeSantis Slams Biden for ‘Dramatically’ Seizing Florida’s COVID-19 Treatment
19:00 GMTWH Reportedly Plans to Launch 'Deportation Flights' to Haiti as Texas Migrant Crisis Worsens