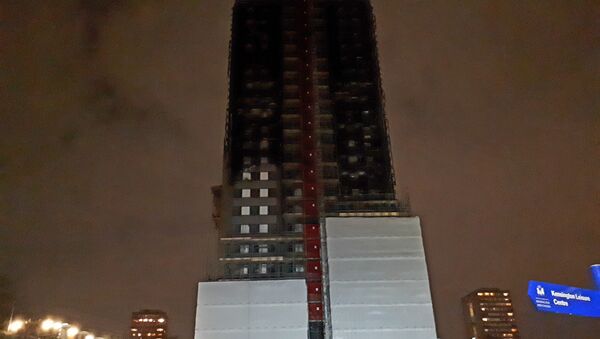 A finance manager for Kensington and Chelsea Council has siphoned off money intended for victims of the Grenfell Tower inferno and spent it on sunny getaways and luxury restaurants.

Jenny McDonagh, 39, admitted to stealing the massive sum of cash from the Grenfell Tower victim fund by spending prepaid credit cards meant for survivors of the fire on a range of personal indulgences.

McDonagh pocketed around £62,000 of what was part of a savings pot meant for those who had their lives directly impacted by the tragedy in June 2017.

The case's prosecutor, Robert Simpson, said McDonagh was a "serial fraudster" who blew her loot on a "trip to Dubai, Los Angeles, meals in expensive restaurants, hair appointments" and "online gambling."

McDonagh pleaded guilty on Thursday, August 30, to two fraud charges, one for theft and the other for "concealing criminal property" at Westminster Magistrate's Court.

She also admitted to withdrawing £48,000 in cash from the victim's fund and depositing £32,000 of it into her own personal bank account using the prepaid cards between October 2017 and August 2018.

She was, during that period, working as the finance manager of Kensington and Chelsea Council, the body tasked with managing the fallout of the Grenfell fire.

In an official statement, the council's Grenfell support unit said that it takes fraud "very seriously" and has "always taken action to root out Grenfell fraud wherever it takes place."

"Over many months, our fraud team has worked with the police to build and push for prosecutions against anyone who sought to take advantage of last year's terrible tragedy. On this occasion it was one of our own members of staff who managed to defraud the council by getting past our own systems and processes. This is both shocking and unforgivable," the council added.

Labour Party MP for Kensington, Emma Dent Coad, has questioned how somebody working for the council was able to get away with stealing such a large amount of money.

"How on earth did a council officer steal £62,000 of Grenfell funding without missing it for so long? It brings up very serious questions about who had access to the prepaid cards she used, and who was responsible for auditing this," Miss Coad said.

Mr. Simpson said McDonagh's fraud was "unsophisticated" as she left a "clear paper trail" by making bookings for restaurants and other luxuries in her own name.

McDonagh has been released on bail with an electronic tracking device attached to her body, and will face sentencing at a later date at Isleworth Crown Court.

"It is appalling that people take advantage of a situation in which vulnerable people were waiting to be housed — this money could have been used for that purpose," said a spokesman for the group, Justice4Grenfell.

#grenfell #fraud #WhitePrivilege had better not give this lowest of the low a light sentence pic.twitter.com/zyhnkgH1Xb

McDonagh is also under investigation for suspected fraud against two former employers — the Medway NHS Trust in Kent and the Victoria Museum in London.

Convicted #Grenfell fraudster Interim Finance Manager under investigation for #fraud at 2 previous employers (V & A and an #NHS trust).

I couldn’t even finish reading this.
This is disgusting abuse of power, no shame, just embarrassing. Who’s going to trust council now #Grenfell pic.twitter.com/GfH2yiL8sB

Unfortunately, McDonagh's case is only but one in a growing string of such offenses.

In July of this year, Elaine Douglas, 51, and Tommy Brooks, 52 — both illegal immigrants from Jamaica —claimed to have lived on the 19th floor of Grenfell Tower. It was later found that their flat did not exist.

The two had used more than £100,000 of support intended for Grenfell survivors on living in luxury hotels for almost a year. In a case that was described by prosecutors as "parasitic fraud" the pair were jailed for three years.

On top of that, Derrick Peters, 58, fraudulently claimed to have resided in Grenfell with a friend, who, Peters' alleged, was incinerated in the fire. Subsequently, the Kensington and Chelsea Council agreed to pay for his hotel fees, which amounted to a whopping £40,000.

However, Mr. Peters' story gradually unravelled and he was eventually handed a six-year sentence in prison for what the prosecution described as his "repulsive" lie.

The Grenfell Tower blaze happened on June 14, 2017. In total, it killed at least 72 people after flames ripped through the block of flats, also leaving hundreds homeless.

The public inquiry into the disaster, which began in May, will continue from Monday September 3, and include testimony from firefighters who attempted to extinguish the inferno.