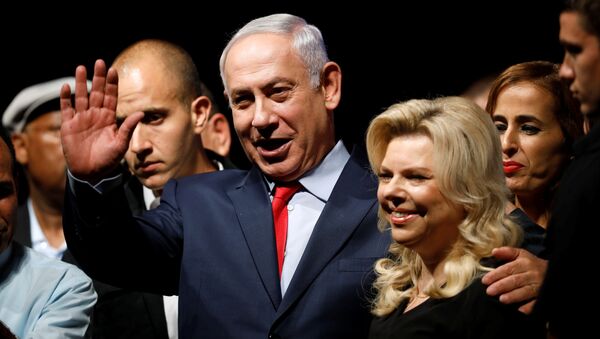 © REUTERS / Amir Cohen
Subscribe
MOSCOW (Sputnik) - Israeli Prime Minister Benjamin Netanyahu's wife Sara is suspected of bribery as part of the investigation into the Bezeq-Walla corruption affair, also known as Case 4000 and involving the prime minister himself, The Times of Israel outlet reported on Thursday.

According to The Times of Israel, earlier in the day, a police representative told the Tel Aviv Magistrate's Court that Sara is suspected of receiving bribes in Case 4000, and that the police have evidence that Elovitch and his wife, Iris, as well as Benjamin Netanyahu and Sara, were all aware of the financial implications of their affair.

This was the first official statement that the prime minister's wife can be added to the list of suspects, according to media reports.

The Netanyahus have been repeatedly questioned as part of the investigation. Netanyahu himself has not yet been named as a suspect in the case. The questioning on August 17 was the 11th one for Netanyahu in a series of corruption probes.

Israeli PM Netanyahu’s Wife Charged With Fraud Over Misuse of Funds
In February, former Netanyahu spokesman Nir Hefetz, and Shlomo Filber, the ex-director of the Communications Ministry, were arrested on suspicion of promoting regulatory benefits worth hundreds of millions of dollars to Israeli Bezeq telecom company in return for favorable coverage of the prime minister on Bezeq's highly popular news site, Walla. Bezeq chairman Shaul Elovitch is also in custody, along with his wife, son and other Bezeq executives.

Regarding Case 2000, the police said that it had "collected sufficient evidence basis" to indict Netanyahu on bribery, fraud, and abuse of trust and recommended to indict Yedioth Ahronoth publisher Arnon Mozes on bribery.