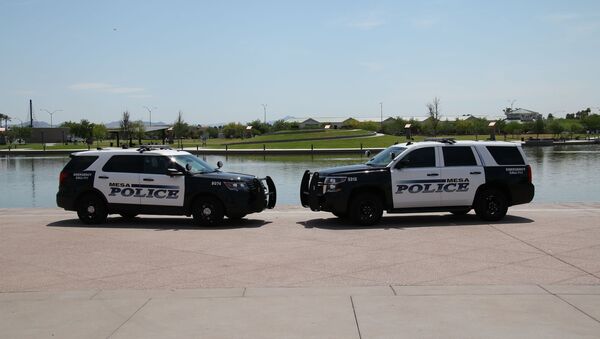 The Mesa Police Department in Arizona is no stranger to scrutiny: a slew of excessive force cases against it have gone viral for their apparent brutality. Now, they’re in for more: after officers were cleared of criminal charges in many of the cases, the FBI has stepped in to investigate.

Two cases recently passed over by local prosecutors — those of the May arrests of Robert Johnson, 35, and Gabriel Ramirez, 15 — were picked up instead by the FBI on Tuesday night. The bureau asked the Mesa Police Department to fork over its records on those incidents for a review of potential civil rights violations.

Johnson was beaten by police while he was unarmed and not resisting them. Officers shackled his hands and zip tied his feet together. As police directed Johnson to an elevator, one of the cops repeatedly slammed his head against a door, Sputnik News reported after video surfaced. Charges against Johnson were dropped, and the officers were placed on leave.

"We hope that the FBI will do a fair investigation and help clean up the Mesa Police Department's culture of hurting citizens and give justice to Mr. Robert Johnson," Johnson's attorney Benjamin Taylor said in a statement. The neighboring police department in Scottsdale, which took over the investigation to preclude any conflicts of interest, itself had a conflict of interest, Taylor argued, according to Arizona Central. There was no "true independent investigation based on the fact that they are a neighboring city, because the officers work together and know each other," he said.

On June 8, video was released showing officers stepping on Ramirez's back and neck and then grabbing him by his neck to push his head against a police squad car, Sputnik News reported. Two officers were placed on leave in that case, and Ramirez is being charged as an adult, accused of aggravated assault.

Both the arrests of Johnson and Ramirez were in May, but video of the incidents wasn't released immediately.

Maricopa County Attorney Bill Montgomery declined to prosecute either of the cases after reviewing the investigations conducted by the neighboring police department. "I don't have any knowledge of an FBI investigation into the two incidents referenced. An FBI review for potential civil rights violations is distinct from a review into potential state criminal law violations. So, just as not finding a basis for a criminal prosecution does not preclude an Internal Affairs or administrative review, the same is true for a civil rights investigation," he told Arizona Central.

Some of the police involved with Ramirez's arrest were of the same unit that bloodied 23-year-old Jose Luis Conde in January. Officers repeatedly punched Conde and swore at him while he was on the ground. "I was tased. I was punched over and over by multiple cops. I was gouged in the eye. And I was hit in the head with a massive police flashlight," Conde said at a press conference in June.

After Conde was taken to the hospital, bodycam footage showed an officer mocking him as he lay in a pool of his own blood, Sputnik News reported. Mesa police say he tried to escape the hospital.

Conde's case hasn't been picked up by the FBI, however.

But FBI probes into the Mesa Police Department don't stop there. They are also looking into the September 2017 fatal shooting of US Army veteran Scott Farnsworth and the January 2016 fatal shooting of 26-year-old Daniel Shaver in a hotel. Shaver was intoxicated at the time of his death and struggled to follow complicated orders barked at him by the officers, who killed him after he had begged them for his life. Anti-police brutality activists condemned the shooting as an execution.

Philip Brailsford, the officer who killed Shaver, was found not guilty of murder in December 2017.

Farnsworth was allegedly armed at the time of his death. He was shot at 11 times by police, who then fired bean bags and deployed a police dog to attack him as he lay unresponsive on the ground.

"I know what police work is like, and I know when something's wrong, and I'm really getting the sense that something is wrong here," he said.