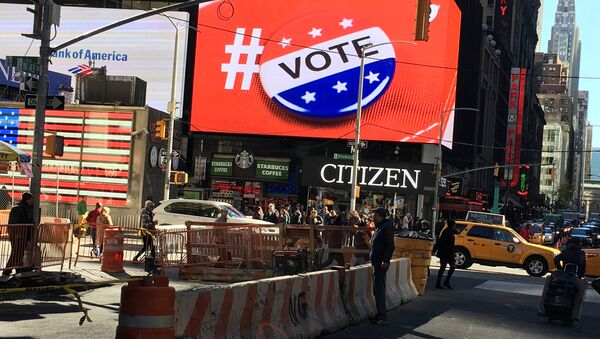 In particular, The New York Times reported on Friday, citing unnamed intelligence officials, that US sources in the Kremlin who had warned about Russian intervention in the US 2016 presidential election "had gone silent" and now the CIA is in the dark about Moscow’s plans vis-a-vis the upcoming congressional midterm elections.

In November, US voters go to the polls to elect lawmakers who will represent their respective states at the federal level. The midterm elections will determine whether Republicans maintain control of Congress and will be seen by many as a referendum on the sitting president’s performance.

US intelligence leaders, including Director of National Intelligence Dan Coats, without any evidence have been warning that Russia will likely interfere in the midterm elections. Coats and others have also claimed that Russia is waging an influence campaign via social media.

Trump 'Accepts' US Intel on Russia Meddling, Says 'Could Be Other People Also'
Former US Defense Department adviser Karen Kwiatkowski told Sputnik that she had doubts about the reliability of the New York Times report and intelligence community claims.

"Reading between the lines of this article, it seems as if politicized members of the US intelligence establishment — including people like Dan Coats — are hedging their bets," she said.

Coats and his colleagues were getting on record their ‘concern’ about Russia interference in these upcoming elections in the event of an unexpected wave of support for President Donald Trump, Kwiatkowski explained.

The New York Times report, claiming that the United States had human sources inside the Kremlin appeared to be based on false assumptions and to be part of a wider strategy to try and convince US public opinion about a non-existent Russian plot to influence the elections, Kwiatkowski cautioned.

Asia
Australia Creates Special Task Force to Prevent Meddling in Elections - Reports
"In terms of this article, I suspect it is wrong in its assumptions, and is part of a larger domestic propaganda effort," Kwiatkowski said.

Kwiatkowski pointed out the remarkable lack of evidence to support US allegations of Russia’s meddling in the 2018 midterm elections.

"The American intelligence apparatus is 'concerned' that the Russians are trying to pick and choose candidates in midterm elections — 435 Congressional elections and 33 plus Senate elections — but they don't have any information about this activity that they ‘know’ is happening," the former Pentagon aide said. "This isn't how intelligence is done. It is however how agendas are pushed, and propaganda rejuvenated."

Former CIA Director John Brennan, who was referred to in the New York Times article, lacked any credibility based on his documented record, Kwiatkowski noted.

"Brennan is an unreliable source, extremely biased, a known liar and he's currently angrier than usual. With his clearance suspended, he may be receiving less information from his friends in the government, and maybe that's what he is complaining about," Kwiatkowski said.

Trump Slams Ex-CIA Chief Brennan as 'Political Hack Who Cannot Be Trusted'
Former Canadian diplomat Patrick Armstrong, who once served as a political official at Ottawa’s embassy in Moscow, told Sputnik that The New York Times report was written to try and sustain flagging interest and support the diminishing credibility of the fiction that Russia intervened in the 2016 US elections.

"The writers are trying to keep the conspiracy going in the hope that the Democrats will control the House and shut down all examination of what really happened," Armstrong said.

However, the fantasy that Russian involvement had cost the Democratic candidate Hillary Clinton the 2016 election was supported by no evidence whatsoever, Armstrong emphasized.

"This is nonsense on stilts and only can be twisted into a question if you believe — as New York Times consumers do as a matter of faith — that Russia 'interfered' in the first place," Armstrong said.

No evidence has been produced other than the "fantasies" in the unsubstantiated dossier produced by former UK spy Christopher Steele.

The only plausible content in the New York Times story was the assertion that Moscow had expelled many of Washington's intelligence assets in Russia, Armstrong observed.

Journo: If Sputnik is Targeted Over Gov't Funding, Why Isn't 'Fake News' BBC?
Kwiatkowski pointed out that the real manipulation of US elections was done by countries that had a historically shared culture with the United States.

The UK’s MI6 and Israel’s Mossad, Kwiatkowski said, are far more active in US elections, at many levels, than the Russians could ever hope to be.

"It's nice for The New York Times to be able not to talk about these risks — in part because Trump is not the candidate these two countries would prefer," Kwiatkowski concluded.

In January 2017, a US intelligence community report that contained zero evidence claimed that Moscow tried to meddle in the US election process. Moscow has repeatedly denied interfering in US elections as such actions would run counter to the principles and practices of Russian foreign policy.