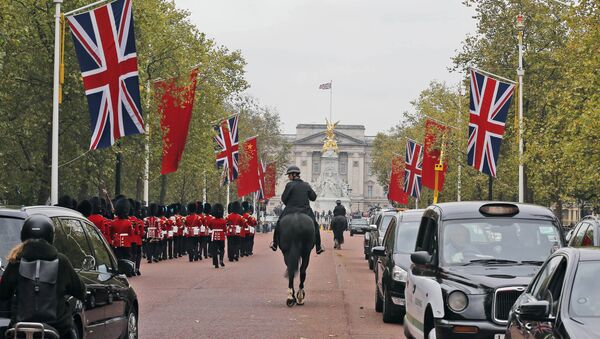 The Sino-British free trade agreement is still up in the air, scholars told Sputnik, commenting on a joint statement by British Secretary of State for International Trade Liam Fox and Chinese Commerce Minister Zhong Shan. According to them, it's hard to make any predictions until the UK strikes its final deal with the EU.

The UK and China continue to deepen bilateral collaboration; however, while London's rationale to build partnerships across the world ahead of its withdrawal from the EU is clear, China may face certain difficulties, analysts told Sputnik.

"Judging from the current situation, the basis for pragmatic cooperation and the signing of a free trade agreement between China and the UK needs to be further strengthened and developed," said Liu Dan, a researcher at the Chongyang Institute for Financial Studies (RDCY) of Renmin University of China. "China has long consistently supported multilateral and bilateral mechanisms for cooperation in the field of free trade within the World Trade Organization's (WTO) framework."

China Agrees to Discuss 'Top Notch' Free Trade Deal With UK
Having referred to the protectionist approach championed by the Trump administration, Liu highlighted that Beijing remained committed to the principle of mutually beneficial cooperation. In light of this, the Chinese scholar believes that the Sino-British partnership would contribute to the development of global trade. Still, while expressing optimism about the potential signing of a free trade agreement between London and Beijing, he noted that the problems the UK and China could face on this path could not be ignored.

"For example, the institutionalization of cooperation related to the free trade zone, the alignment of the national governments of the two countries, the implementation of international standards and rules by both parties, as well as the lowering of the threshold for access to each other's markets," he elaborated.

For her part, Kira Godovanyuk, a specialist from the Institute of Europe at the Russian Academy of Sciences, warned against jumping to conclusions before the UK's withdrawal from the EU. The Russian scholar cast doubt on Britain's ability to effectively negotiate after it pulls out from the bloc.

"The last proposal of the UK government implies that, at least with regard to trade in goods, it will remain in the common European market and the Customs Union," Godovanyuk pointed out. "This entails impossibility of concluding agreements on free trade with third countries. China is discussing these prospects very cautiously, and, of course, it will wait for the end of the process of Britain's withdrawal from the EU."

'Bit by Bit': Reasons Behind China's Apparent Hesitancy to Buy Gold
At the same time, she underscored that Britain views China as its key trading partner after Brexit. London is laying the foundation of its future policy by negotiating free trade agreements with a number of countries. In particular, it is holding talks with Japan, and almost 50 countries of the Commonwealth.

On August 25, China's Commerce Ministry announced that London and Beijing had agreed to look at the possibility of concluding free trade agreement after the UK leaves the European Union. The statement was preceded by talks between British Secretary of State for International Trade Liam Fox and Chinese Commerce Minister Zhong Shan, which took place on August 24, in Beijing.

And this is not the only example of how the two countries are making efforts to strengthen the "golden era" in bilateral relations that was formally launched in October 2015 when Chinese President Xi Jinping paid an official visit to London. During recent talks with his Chinese counterpart, Fox expressed hope for bolstering political cooperation with China and increasing interaction in the field of investment and trade.

The British international trade secretary signaled Britain's commitment to free trade and stressed that London opposed unilateralism and protectionism, adding that he hoped that Beijing and Washington would manage to solve their differences.

Trump is Reportedly 'Totally Fed Up' With China's Policy
It is expected that the UK-EU negotiations over Britain's withdrawal from the bloc would be completed this autumn paving the way for a Sino-British deal. Nevertheless, Zhong announced that Beijing would welcome the UK as a guest of honor at the first China International Import Expo that is due to take place on November 11 in Shanghai.

For his part, Fox stressed that the British delegation would be led by Prince Andrew. The two countries also agreed to bolster collaboration within the framework of the Belt and Road initiative. It is expected that Chinese and British companies will cooperate to explore the markets of third countries.

In late July, Britain's new foreign secretary, Jeremy Hunt, met with Chinese Premier Li Keqiang, Politburo member Yang Jiechi and Foreign Minister Wang Yi. It was during this meeting that the idea of the bilateral free trade agreement emerged and it took less than a month for London to signal its endorsement of the Chinese initiative.