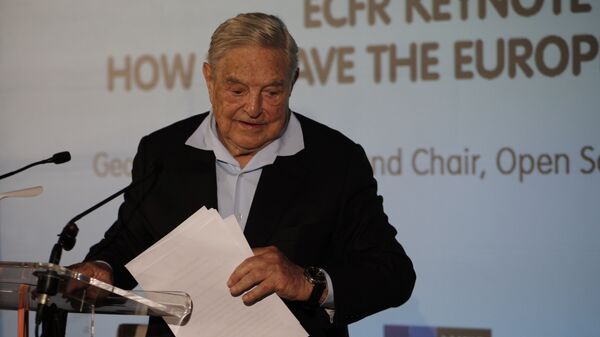 © AP Photo / Francois Mori
Subscribe
On August 24 the new legislation came into force, which imposed a 25% tax on organizations managing programs and activities which aim to promote immigration. The new package of bills, dubbed “Stop Soros,” was passed in June to curb the illegal immigration.

The Central European University, established by Hungarian-born US billionaire George Soros, has suspended its programs for refugees and asylum seekers as well as the EU-funded grant on migration policy that the CEU manages.

“CEU’s action follows advice from our tax advisors in respect of potential liability for a 25% levy on our immigration-related programs. We are suspending these programs while we await clarification of our tax and legal situation,” the statement, posted on the web-site of the CEU reads.

In their announcement, the educators have also emphasized that their programs “have provided educational training only for persons legally admitted to Hungary.”

The new legislation, which introduced a 25% tax on non-government organizations funding and managing "programs, actions and activities which directly or indirectly aim to promote immigration," and specifically targeting education activities "showing immigration in a positive light," came into force on August 24.

It’s a part of a series of laws, officially known as the "Stop Soros" package, that would place restrictions on NGOs and make helping undocumented migrants a criminal act. The lawmakers also passed a constitutional amendment barring any "alien population" from being settled in Hungary. It was pushed by the government of Viktor Orban, which was reelected in April with a landslide victory.

Budapest previously expressed opposition to the activities of billionaire George Soros and his organizations, blaming him of meddling in the country's internal affairs and forcing globalization. Prime Minister Orban has repeatedly accused Soros of encouraging mass immigration in order to undermine European states.

Soros has also been blamed for interfering in last month's Hungarian parliamentary elections, with Budapest claiming he had hired over 2,000 staffers to "meddle" in the election.