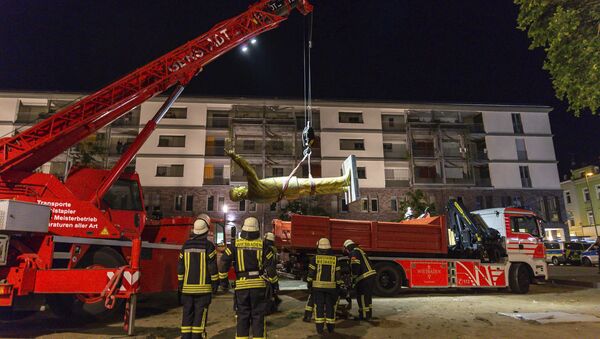 The Hussein-styled effigy of the Turkish president, criticized in Germany for his policies, surprisingly appeared as a part of an art biennale in Wiesbaden. The installation, which was vandalized, has prevented the authorities, who initially decided to let the statue be, a dilemma as they had to choose between artistic freedom and security.

The capital city of the German state Hessen has decided to remove the four-meter-high golden portrait of Turkish President Recep Tayyip Erdogan, erected on August 27 on one of the central square as part of the Wiesbaden Biennale art festival, which runs till September 2 under the motto "Bad News."

This morning, the golden figure of the Turkish president, copying the posture of an infamous monument of Saddam Hussein and weighing 2.5 metrictons, was removed with a crane. The police have reported no incidents have been registered on site.

​The city authorities announced their decision to remove the golden Erdogan on Twitter late in the evening on the day after the statue appeared, stating that security could no longer be guaranteed.

According to the police, the next day after the installation was opened supporters and opponents of the Turkish President had a dispute at the statue. A police spokesman reported a "slightly aggressive mood," which didn’t go further than a verbal exchange. However, the "Wiesbadener Kurier" quoted public order chief Oliver Franz, saying verbal arguments tended to grow violent when weapons were spotted.

​The first night after its presentation, golden Erdogan was vandalized, as the words "F*** you" and a penis were painted on the statue. Shortly after the statue was unveiled, it became a topic of heated discussions across Germany, where the media and many politicians have vigorously criticized Erdogan for his polices, with people leaving discouraged, irritated and outraged comments as the local outlet Wiesbaden Kurier reports.

Despite the uproar, at first the city authorities decided to let the statute stand till the end of the biennale as they concluded that the effigy was "not a political demonstration," and "can be tolerated within the framework of artistic freedom." The Mayor also admitted that the city has permitted a general human statue during the biennale, but the authorities had no idea that it would be Erdogan.

Relations between Berlin and Ankara deteriorated following the failed coup attempt in Turkey in July 2016. Ankara has accused Berlin of providing asylum for coup plotters, while Berlin has strongly criticized the detention of German journalists and human rights activists in Turkey.