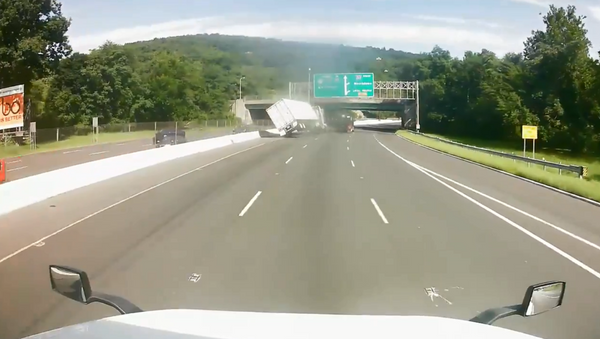 The startling crash, which occurred August 9, took place on the northbound lanes of Route 17 after the driver of a gray SUV took it upon himself to change lanes and then pump his brakes in front of the candy truck. According to Mahwah police, the SUV driver made his maneuver because he felt that the trucker was driving recklessly.

Footage captured by the dashcam of another truck shows the SUV pull up alongside the candy truck and keep even with the truck in an effort to keep the trucker from switching into the left lane. With the trucker catching on and maneuvering his way around the SUV to shift lanes, the driver of the SUV then speeds up and gets in front of the (likely frustrated) truck driver.

For the next few moments, the SUV straddles the two lanes, occasionally hitting the brakes, before catching the Mountainside Ave/Crossroads Blvd exit. Four seconds after the SUV disappears from the camera view, disaster strikes as the driver of the tractor-trailer loses control of his rig and swerves onto the median, causing the trailer to flip over.

​"Miraculously, no other vehicles struck the tractor, which could have resulted in a major accident, since it occurred at approximately 9:46 a.m. on a weekday morning," Mahwah Police Chief James Batelli later told NJ.com, adding that the truck was also only hauling candy.

Rather than taking matters into one's own hands, Batelli stressed that motorists should report incidents to the police. "In this latest incident, the proper approach would have been for the driver of the SUV to have dialed 911 and report the tractor to law enforcement," he said.

The department released the footage on Tuesday with the hopes of highlighting the dangers of road rage ahead of the Labor Day holiday, traditionally a very heavy road traffic weekend in the US.