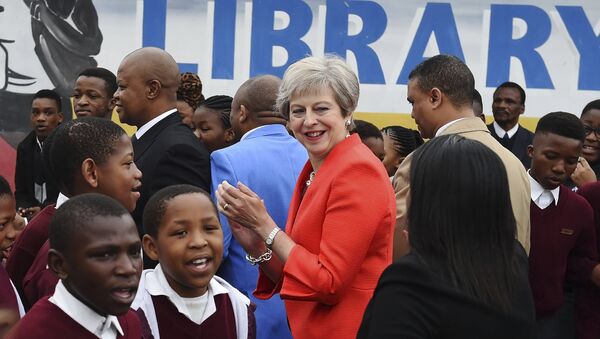 © AP Photo
Subscribe
International
India
Africa
Theresa May has announced plans to boost Britain's investment in Africa after Brexit, during her first trip to the continent as prime minister. Sputnik spoke to Sub-Saharan African political and economic analyst, Aly-Khan Satchu, about overseas investment in the continent.

On Tuesday, August 28, in a speech in Cape Town, Mrs. May pledged £4 billion (US$5.1 billion) in support for African economies and said she wanted to create jobs for young people and make Britain the G7's biggest overseas investor in Africa, ahead of the US.

The British prime minister, who is due to visit Nigeria on Wednesday, August 29, pledged to prioritize investment in Africa as she sought to drum up trade deals with Brexit looming in March 2019.

"By 2022, I want the UK to be the G7's number one investor in Africa, with Britain's private sector companies taking the lead," Mrs. May told business leaders in Cape Town.

"I want to create a new partnership between the UK and our friends in Africa built around shared prosperity," she added.

Britain Has 'Leverage' In Africa

Sub-Saharan African political and economic analyst, Aly-Khan Satchu, said Britain had a "lot of leverage" in Africa because of the historic links from its empire and commonwealth.

"Because of its history Britain has a lot of leverage and indeed ground-level knowledge of the continent so in a post-Brexit world it makes sense to sweat its African equity," Mr. Satchu told Sputnik.

He said he suspected the £4 billion was not new money but had come from other budgets but now had a "sharper focus on the youth dynamic".

"Britain preceded China and the US and is seeking to play to that advantage. This is largely a ‘born free' generation and the UK is wise to play to that theme for multiple and overlapping reasons," Mr. Satchu told Sputnik.

He said her pledge to become the G7's biggest investor in Africa was a "big ask".

"Macron's France has come into Theresa May's patch aggressively targeting anglophone Africa. The US is seeking to roll back China and will certainly put more money to work. If you look at North American remittances into Africa and at portfolio flow capital then the US looks likely to stay ahead," Mr. Satchu told Sputnik.

China remains the biggest overseas investor in Africa, but is not in the G7.

"China had a singular and positive influence on Africa. It rebalanced the demand side for Africa's commodities and also bought those commodities on a long-term basis. It was this which triggered the African recovery some two decades ago," Mr. Satchu told Sputnik.

"However, since then a freewheeling China Inc has favorited elites, has facilitated large-scale looting via inflated infrastructure, some of which were white elephants on Day One, and has lumped the African citizen with the tab. How this plays out is now the key to Sino-African relations going forward. A Hambantota scenario would be problematic," Mr. Satchu said, referring to the Sri Lankan port which has been leased to China for 99 years because the government in Colombo was unable to pay for it.

Theresa May, the British Prime Minister and Angela Merkel, the German Chancellor to visit the so called lifeless person in Nigeria on Wednesday and Friday respectively. They would be discussing partnership on trade and security. It is good to be lifeless, na dem dey rush ham. 🤓 pic.twitter.com/jxbUcf7GxV

​Kenya Is Last Stop For Theresa May

On Thursday, August 30, Mrs. May will meet Kenyan President Uhuru Kenyatta, who has just returned from seeing US President Donald Trump in Washington.

Mr. Satchu said Kenya was one of a number of economies which were performing well in Africa — others include Senegal, Ethiopia, Ghana and the Ivory Coast.

"But it's been very lopsided growth, trickle down has been anemic. The secret is to unleash human capital and connect it to the 21st century. Look at internet speeds. Ethiopia's model, while good, has run out of cash," Mr. Satchu told Sputnik.

The views and opinions expressed in this article are those of contributor and do not necessarily reflect Sputnik's position.