‘Disturbing Statistics’: UN Finds Over Half of Refugee Kids Don’t Go to School 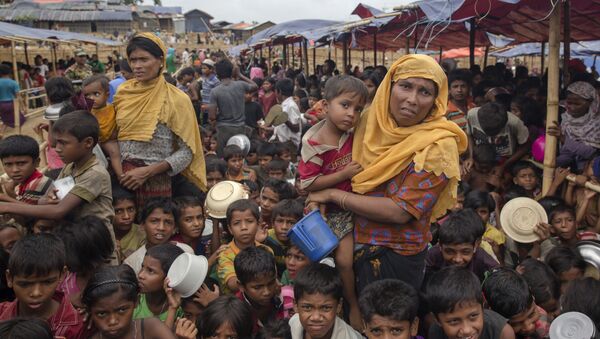 A new report by the UN’s primary refugee agency has revealed that as the number of child refugees has skyrocketed, fewer than half are enrolled in school.

The United Nations Council on Human Rights (UNHCR) published a new report Wednesday, titled "Turn the Tide: Refugee Education in Crisis," which found that out of 7.4 million refugees of schooling age, 4 million don't go to school — an increase of 500,000 in a single calendar year.

"Education is a way to help children heal, but it is also key to rebuilding their countries," Filippo Grandi, UN High Commissioner for Refugees, said in a press release Wednesday. "Without education, the future of these children and their communities will be irrevocably damaged."

Last year's report, titled "Left Behind" and published in September 2017, noted only 6.4 million refugees of school age, 3.5 million of whom didn't go to school.

Worldwide at the end of 2017, there were 25.4 million refugees, UNHCR noted, 19.9 million of them under its purview — the other 5 million refugees are Palestinian refugees, who fall under the aegis of the United Nations Relief and Works Agency for Palestine Refugees in the Near East (UNRWA).

The report notes that more than half — 52 percent — are children, 7.4 million of whom are of school age. Four million of those don't go to school.

Beyond that, the gap widens still further: only 1 percent of refugees will attend any sort of college, while 37 percent of children worldwide are enrolled in higher education.

"School is the first place in months or even years where refugee children find any normality," Grandi said. "Based on current patterns, unless urgent investment is undertaken, hundreds of thousands more children will join these disturbing statistics."

In June, the UN's special representative for children and armed conflict said in a report that the number of children affected by armed conflict, as well as the severity of grave violations affecting them, had increased in the past year, which the report characterized as a "despicable trend."

"The report details the unspeakable violence children have been faced with, and shows how in too many conflict situations, parties to conflict have an utter disregard for any measures that could contribute to shielding the most vulnerable from the impact of war," Special Representative of the Secretary-General for Children and Armed Conflict Virginia Gamba said in a press release June 27 that accompanied the publication of the report.

The report catalogued more than 21,000 grave violations of children's rights during calendar year 2017, a shockingly large increase of 5,500 since 2016. More than half of them were instances of killing or maiming, with huge increases coming from the wars in Iraq and Afghanistan, the Rohingya crisis in Myanmar and conflict in several central African countries. The UN reported that 881 verified child casualties in Nigeria were caused by suicide attacks, including the forcing of children to carry out the attacks.

"When your own house or your school can be attacked without qualms, when traditional safe-havens become targets, how can boys and girls escape the brutality of war?," Gamba said. "This shows a blatant disregard for international law by parties to conflict, making civilians, especially children, increasingly vulnerable to violence, use and abuse."