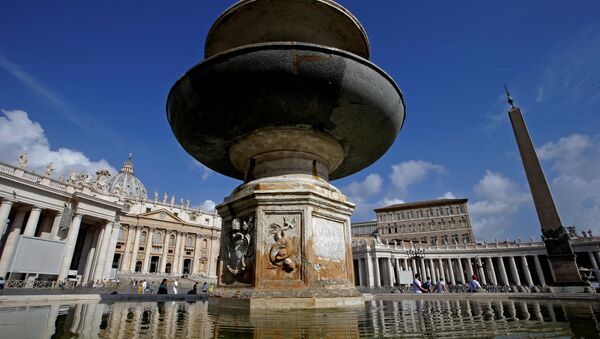 According to a letter by a former Vatican ambassador to the US archbishop, Pope Francis has been aware of cases of child sex abuse in the Catholic Church ever since he was elected but did not take any measures. Reacting to accusations, the pope told journalists that people should read the letter carefully and judge it for themselves.

Sputnik discussed the effects the letter could have on the papacy with Des Cahill, professor of intercultural studies at RMIT University.

Sputnik: What effect could the letter have on the papacy?

Des Cahill: The issue of clerical sex abuse of children by priests … has been brewing for about 20-30 years and this is the latest chapter in this long saga. It is highly unlikely that the pope will resign and the reason for that is that this letter could be part of Vatican infighting and trying to embarrass the pope who is seen as too liberal and progressive by some of the more conservative elements within the Vatican.

'Shame and Sadness': Vatican Expresses Support for Victims of Predator Priests
At the same time, there is some frustration with Pope Francis because he did issue a letter to the Global Catholic Church on the issue in response to the report from the state of Pennsylvania. Plus his visit to Ireland because Ireland has been devastated by a very high [number of] incidences of clerical sex abuse of children. I think that the pope is preparing the ground to make some significant changes within the church, but what those changes are remains to be seen.

Sputnik: You mentioned that this letter could actually be the result of some kind of infighting within the Vatican itself; what leads you have those suspicions?

Des Cahill: Because Archbishop Vigano was demoted at one stage and he was unhappy with that demotion almost 10 years ago. And it may be his way of getting back at Vatican officials and the Vatican itself.

But he also is being very honest in saying that the pope and other Vatican officials did not address the issue of the crimes committed by American Cardinal Theodore McCarrick and that something should have been done much earlier to demote Cardinal McCarrick and take away his title as cardinal or prince of the Church.

Pope Condemns Clergy of Child Sex Abuse Amid US Reports of Decades-Long Felonies
Sputnik: The pope said that the accusations in that 11-page letter spoke for themselves; what do you make of his response to that letter? Do you think there was actually something in there that indicated that this could have been some kind of revenge or something else?

Des Cahill: It’s fairly clear to me that the pope was informed about the offenses that Cardinal McCarrick [committed]. But I think it was early in his papacy, and I think that he didn’t feel that he was sufficiently strong and experienced enough to deal with a very senior cardinal.

And since then there have been other cases as well where very senior church officials have resigned or been demoted because of various failures, particularly the failure to report priests who have offended against children to criminal justice officials like the police.

The Vatican itself is not at all sure about what it should do for these cases because it has the view that child sex abuse is a sin, but it doesn’t really see child sex abuse as a crime as well as being sinful.

Sex Scandals in Roman Catholic Church: Most Resonant Cases in 2018
This is part of the Vatican’s problem because it has its own canon law and it can punish priests and cardinals – but, unfortunately, right throughout this saga, over the last 30-40 years, the church canon law hasn’t been used properly to take action against these priests and the bishops who have covered up for them.

This is part of the scandal and part of the catastrophe. The reasoning behind that is because like all religious leaders whether they are Catholic, Protestant or Orthodox, they want to protect the image of their religious organization as pristine and all-holy.

And, of course, the public revelation of such crimes, obviously, has a negative effect upon the church in particular countries as we have seen in Ireland. One of the reasons why Pope Francis went to Ireland was to repair the damage that has been done to the Irish Catholic Church by priests and bishops who covered up [abuse] that goes back to at least 1950s.

Views and opinions expressed in this article are those of Des Cahill and do not necessarily reflect those of Sputnik.