US Expands Romanian Air Base Facilities for Reported Drone Deployments 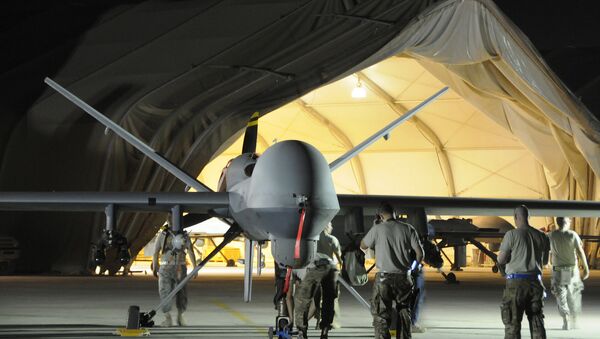 The US Air Force is pouring $40 million into new construction at an air base in Romania in addition to prior infrastructure projects that may provide housing for combat drones, reports suggest.

On Monday, Defense News reported that USAF has set in motion plans to allocate millions of dollars toward new construction and existing base improvement projects in Campia Turzii, Romania.

While the US military does not maintain a permanent contingency at the base, according to Defense News, the base has provided accommodation to a variety of US personnel in recent years. Most recently, a squadron of F-15C/D Eagles and approximately 300 airmen arrived at the Romanian base this summer, the report noted. A-10 ground attack aircraft, F-16 fighter aircraft and accompanying crews have previously been stationed at the base as well.

On Tuesday, Defense News claimed to have learned that MQ-9 Reaper drones may in the future be kept inside a $950 million hangar facility that has already been constructed at Campia Turzii. Efforts to build the aircraft shelter commenced in May earlier this year. After an up close and personal viewing of the hangar, Defense News reported the facility "will be able to house medium-altitude, long-endurance drones."

The MQ-9 Reaper fits that bill.

MQ-9 aircraft replaced the MQ-1 Predator drones in the US Air Force fleet in 2017 as part of a modernization initiative. Not all the MQ-9 aircraft are armed and ready for shooting Hellfire missiles, though. A group of Reapers stationed in Poland only have the ability to provide eyes on Eastern Europe, according to Defense News.

One thing seems clear about any potential MQ-9 presence at the base in Romania: the remotely piloted aircraft won't be running operations in eastern Ukraine, according to Air Force Times, citing a current Reaper pilot. The pilot said the US does not have "total air supremacy" there, and this is a precondition for flying a Reaper drone anywhere.

In any event, the potential deployment of Reapers is yet to be confirmed. "As a matter of policy, we do not speculate on potential deployments of future aircraft unit movements," a spokesperson for the Pentagon's European Deterrence Initiative said Tuesday.

The US and NATO are expanding their footprints in Europe, to the chagrin of Moscow, which has voiced complaints about NATO's eastward expansion, author Daniel Lazare tells Sputnik News.
"The irony, of course, is that Trump called for a rapprochement with Moscow during his presidential campaign. But the drive has only accelerated," he said.

"US foreign policy seems to have a life of its own beyond the control of elected officials."

Integrating Eastern Europe with the "US military network" is part of a strategy to "stimulate demand for US military goods," Lazare noted, adding that "drumming up profits for American arms manufacturers has never had a higher priority than under Trump."