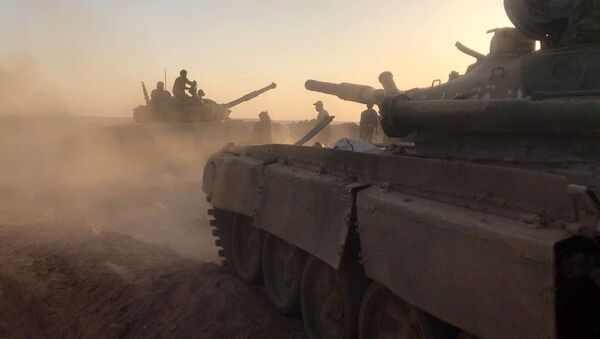 While the Syrian Army had secured the entirety of the Damascus governorate and much of southern Syria earlier this year, government forces are gathering in northwestern Syria as they prepare for an offensive against hardline Islamist militants in Idlib.

A new Twitter account, apparently run by a six-year-old girl in Idlib, has been likened by Twitter users to Bana Alabed’s, which was heavily active during the Syrian Army’s liberation of Aleppo, urging the West to militarily intervene.

The latest account is ostensibly used by a girl named Hala, and although she currently has just 322 followers in comparison to Bana’s 343,000, social media users have suggested that the profile is aiming to draw in a foreign military intervention to aid militants by sharing news of false-flag chemical attacks in Idlib and smearing government forces in other ways.

My name is Hala 6 years from the city of Idlib 🤗 pic.twitter.com/6vxyF4Z2El

Her tweets are written in a similar style to Bana's, in surprisingly good English, and often include images of Hala holding placards with corresponding hashtags, such as #AllEyesOnIdlib.

While Bana wrote and published open letters to US President Donald Trump urging him to take action to stop the bombing of Aleppo, Hala's account has yet to do this.

Social media users have warned that this is the latest Bana-inspired propaganda account, with some claiming that the accounts are in fact run by "American trolls" or Britain's intelligence service.

Other profiles have also been set up ahead of the anticipated Idlib offensive and users have also been warning of their propaganda efforts and inherent bias, suggesting they are part of a concerted disinformation campaign.

Although Bana left Syria, alongside her mother and father, who reportedly served in the ranks of Islamist militants in Aleppo, she has continued to call for action against the Syrian government and has met a number of high-profile celebrities and politicians, including Turkish President Recep Tayyip Erdogan.

However, despite her best efforts, many consider Bana to be a blatant propaganda stunt and have worked toward exposing her parents' exploitation of her to further the narrative of Syrian and Russian forces deliberately targeting civilians in Syria.

Syrian Army Doesn't Need Permission from US to Attack Terrorists – MFA Source
The Idlib governorate is the last major militant bastion in Syria and based on the Syrian Army’s recent progress against militant forces, the various Islamist militant groups in the province are unlikely to be able to fend off the impending offensive without a direct military intervention from abroad.

Tens of thousands of government troops and allied militiamen have been deployed to Idlib and north Latakia in recent weeks, and the offensive is likely to be launched at some point in September, though some light skirmishes have already taken place.

READ MORE:  Syrian Air Defenses on Alert Ahead of Possible US Attack – Reports