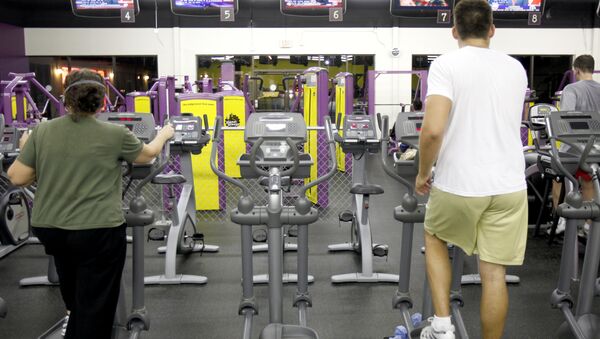 © AP Photo / Gerry Broome
Subscribe
International
India
Africa
A weight-loss pill has raised renewed hopes for people fighting obesity. Researchers in the US found that an anti-obesity medication called lorcaserin appears to be safe for heart health even if used long-term after testing it out on 12,000 people suffering from obesity or excess weight.

Sputnik discussed the effects of the weight-loss pill with professor Jason Halford, an obesity expert at the University of Liverpool.

Sputnik: How breakthrough is this weight-loss pill?

Jason Halford: I think one of the interesting things about this tablet is that it's actually been available in the US for a number of years now, but in Europe the regulators have some concerns over safety because of previous drugs in this class, serotonergic drugs, so they needed data from a long-term trial and this has gone on for a couple of years or more to prove that there are no side effects.

Russia
Effective Nutrition: Scientists Establish How Diet Affects Intestinal Microflora
Sputnik: Obviously you can’t really say that there’re no side effects, there must be some, are they just not significant, can you give us an idea?

Jason Halford: I think you’re quite correct there. I think the issue was previously many serotonergic drugs have been withdrawn for quite serious side effects, they were very infrequent, but when people got them they were quite severe, in fact, life-threatening, and so what this trial has done is look for those type of side effects.

Sputnik: And it has not found them, we have to remember also that obesity is often a condition that is in itself life-threatening for some people who have severe excess weight.

Jason Halford: Yes, precisely, we are certainly in Europe short of treatments other than behaviour modification, lifestyle change, or, perhaps, more fundamental things like bariatric surgery which obviously is quite a significant commitment.

Diet Bitcoin: Digital Currency From Drug Shot Pablo Escobar's Bro Coming Soon
Sputnik: Can you give us a little bit of an idea of what exactly it is that this pill does, it's supposed to decrease appetite…

Jason Halford: Yes, it works on the serotonin system in the hypothalamus; it specifically activates serotonin receptors which produce what we call a sense of satiety, which makes you feel fuller for longer and dampens down hunger.

Sputnik: What percent of people who suffer from obesity, suffer from obesity because of the feeling of hunger? There’s a lot of different things that cause people to overeat, of course, there’re emotional reasons and some people are just addicted to food. To what extent are people just eating because they’re hungry? I think a lot of people eat even when they’re not hungry, just because something tastes good or because they’re addicted or other reasons.

Jason Halford: We do know that appetite control in the obese does not function very well, so it does need a boost;

And we also know that active dieting undermines appetite control as well, because it makes you hungry, so people do need some help in controlling their appetite, but you’re quite right, there are lots of reasons why people overeat and in particular there are emotional problems involved; it’s best to actually address those before trying to attempt to lose weight.

Sputnik: Do you feel that this really is a breakthrough, the big breakthrough that everybody’s been waiting for?

Jason Halford: I think it’s another useful tool, which may help certain people and we need all the tools that we can get in terms of challenging obesity because most adults are either overweight or obese in Europe and Russia is very much the same.

Sputnik: Of course I’ve heard of some fairly serious side effects that are being alleged and, of course, these come not with the proper use of the tablet, but I’ve heard that these kinds of pills could actually have hallucinogenic qualities if they’re taken in excess of the recommended dosage – how risky is that?

Russian Biologists Destroy Cancer Cells by 'Putting Them on a Diet'
Jason Halford: I think one of the reasons they designed this drug to be selective to the 2C receptor was actually to avoid some of those hallucinogenic qualities, but the point is you should never take any drug over the level that it has been tested and approved at because they’re always dangers involved, so serotonin syndrome and potentially other physical and mental affects could happen.

Sputnik: It seems that the active ingredient, which is lorcaserin, well experts are saying that it’s one of the most effective weight-loss pills yet and that it is helping every 2 in 3 adults that battle weight loss, and the slimmers on the pill actually lost three times as much weight as those that were just trying to diet and exercise. It was also found that the pills cut the risk of diabetes by a fifth, how does that work? Is there another quality of this medication that actually does have an effect on diabetes, or is it simply the fact that people were eating less?

Jason Halford: I think looking at the dates there the effect was due to the weight loss.

The drug is actually producing fairly modest weight loss, roughly 5-10 kg in an individual with obesity, but that degree of weight loss, although it may not seem a great deal to people who need to lose a lot more weight, confers benefits; so even moderate weight loss gives you good results in terms of reduction in risk factors of things like diabetes, cardiovascular health problems and, perhaps, even forms of cancer.

Views and opinions expressed in this article are those of Jason Halford and do not necessarily reflect those of Sputnik.