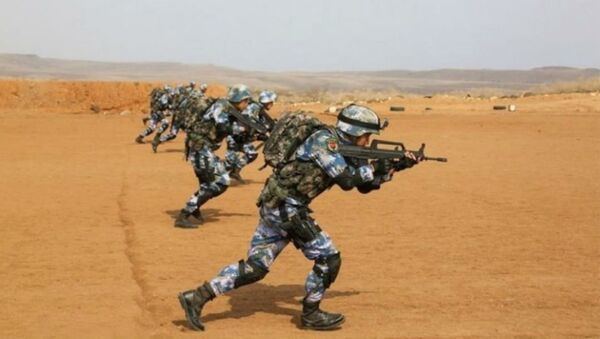 China has reportedly started to build a training camp in Afghanistan's Wakhan Corridor, a narrow area that separates Tajikistan from Pakistan, in efforts to improve counterterrorism efforts in the war-torn country.

Sources with knowledge of the matter told the South China Morning Post for an article published Tuesday that once the base is completed, Beijing will dispatch to it hundreds of troops, amounting to at least one battalion. A battalion could consists of more than 500 soldiers, according to the Post.

"Construction of the base has started, and China will send at least one battalion of troops, along with weapons and equipment, to be stationed there and provide training to their Afghan counterparts," one source told the publication.

The official later noted that a completion date for the base was not yet determined and that the base would likely have a slightly different role than that of Beijing's first overseas military base in the East African nation of Djibouti.

Following the 2017 opening of the Djibouti base, Chinese state-owned outlet Xinhua reported that the base was "meant for supply missions" and was by no means a "military outpost built to boost the country's military presence and play deterrent roles in the region."

"The Djibouti base has nothing to do with an arms race or military expansion, and China has no intention of turning the logistics center into a military foothold," the outlet added.

Song Zhongping, a military analyst based in Hong Kong, says the new base could serve as a training base to help "strengthen anti-terrorism cooperation and military exchanges between Beijing and Kabul."

"Afghanistan is very weak on counterterrorism," Song told the Post. "And the authorities there are worried about a Taliban resurgence, but they can't do anything about it without help from the US, China and other countries."

The Post's latest update on the Afghan base comes months after Wu Qian, spokesperson for China's Defense Ministry, shot down suggestions in January that a base was going to be built in Badakhshan after defense ministers from China and Afghanistan agreed in 2017 to work on fighting terrorism together. "The so-called issue that China is building a military base in Afghanistan is groundless," Wu said.