Doing It in the Road: Revelers Simulate Blatant Street Sex in London (VIDEO) 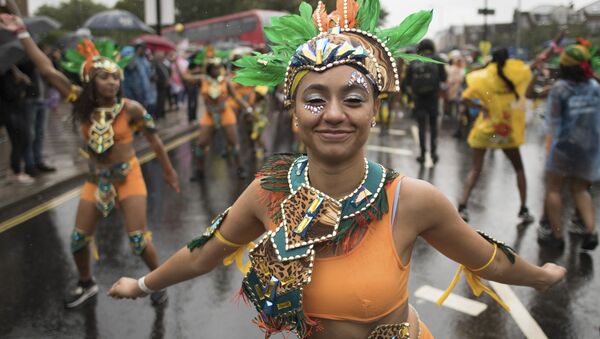 A viral video shows two people perform a sexually explicit dance in the middle of a West London street, much to the amusement of onlookers. The clip has divided netizens, with some calling the dance routine "animalistic" and "obscene."

A couple was filmed simulating sordid sex in the middle of a street in West London. In the footage, an overenthusiastic man, presumably a Notting Hill Carnival goer, can be seen humping his crotch against a woman lying on her back underneath him on the wet ground.

A pair of their mates then join in, turning the action into a laughing foursome; a man and a woman can be seen staring at the performance from the windows of a nearby house.

Plenty of internet users have voiced their distaste for the raunchy road romp, sarcastically calling it "family-oriented."

Very family oriented, is it not!

Child friendly. Lovely. I wouldn’t go within 10 miles of it

Such culture, I can almost smell the enrichment seeping out of them.

I'm almost at the point of abandonment.

'Wigbert, how much did you say we paid for this house in the so called quiet part of London'? pic.twitter.com/agWAhigNFG

Some people, however, deemed the routine funny and harmless and praised it as part of the Caribbean culture.

This is a part of black carribean culture. Nobody is being harmed so I don’t see what’s so animalistic about it? Just be honest about your prejudices

Harmless fun lol. No one complains when you lot sniff lines of charlie at Glastonbury

The simulated sex is apparently part of a style of a popular dance, known as "Daggering", that originated in Jamaica and includes people simulating various sexual positions. The Jamaican government banned "daggering" songs in 2009, claiming that they promote aggression and violence.