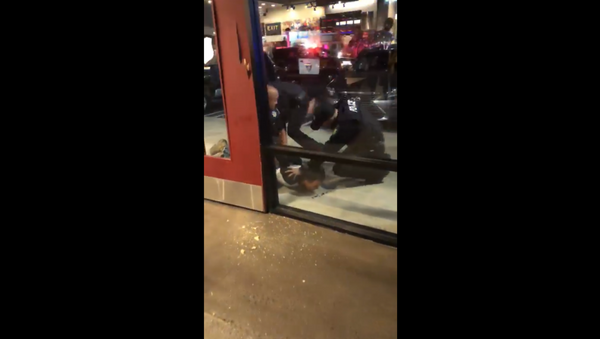 © Screenshot/Dietrich Krous
Subscribe
International
India
Africa
California's Vallejo Police Department came under fire this weekend after video surfaced on social media showing an officer repeatedly hitting a handcuffed suspect in the back after police tackled him into a nearby restaurant's front door.

Footage of the Friday incident shows an officer straddling a man in an attempt to handcuff him as a second officer is seen crouching near the suspect, repeatedly hitting him in the back with his department-issued flashlight. At some point, the suspect begins bleeding from his face, leaving a trail of blood on the pavement.

The video, shared online by Dietrich Krous, was filmed from the inside of a local pizzeria. It does not show what led to the confrontation.

​"Hey, don't beat him, why are you beating him… Hey! He's cuffed," one of the customers inside the establishment yells out. "They busted his face and everything."

Moments after a third officer arrives and spots the filmer, the suspect is dragged toward the police cruiser. Although the camera was not able to catch a glimpse of the suspect's entire face, it can be seen partially covered in blood. The concrete where the man was lying face down is also stained with blood.

According to the Vallejo Times Herald, the man, identified as 22-year-old Angel Bagos, was later taken to a local hospital to receive treatment for his injuries.

In a Saturday statement to the Herald, Vallejo Police Captain Lee Horton explained that officers were called to the scene after a 14-year-old girl phoned the department to report that she was being held inside a "man's car and that he would not take her home."

He also indicated that the officers' use of force "appears appropriate for these circumstances."

Things intensified further when Bagos failed to remove his left hand from under his body, according to Horton. "Officers ordered the suspect to release his hand, but he did not comply. One officer then administered multiple strikes to the suspect's back area and left arm using his flashlight as an impact weapon — this was effective, as the suspect then released his hand and officers placed him in handcuffs," he said.

Horton later claimed that officers did not "use any further force on the suspect after he was handcuffed." The minor was also returned to her home. It's unclear how Bagos and the teenager knew each other.

Although the use of force was not initially deemed improper by Horton, the official did inform the local outlet that an investigation would be launched into the matter.

This is not the first time Vallejo police have been accused of using excessive force. In March of 2017, a Vallejo police officer was captured on cellphone footage tackling and beating an unarmed man while aiming his gun at bystanders, the San Francisco Chronicle reported.