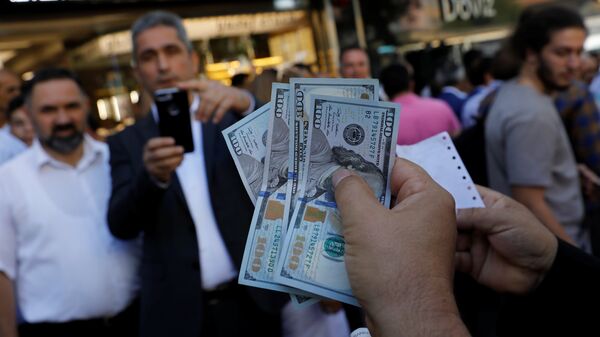 Turkey's Minister of Finance and Treasury Berat Albayrak, speaking at a news conference in Paris following a meeting with his French counterpart, Bruno Le Maire, said that the US' moves are isolating it from its allies.

According to Berat Albayrak, the dollar is losing its status as global trade tool.

The Turkish finance minister added that the US measures have the potential to cause problems, including instability in the region, and that those steps are being deliberately taken against Turkey for political reasons.

"These steps taken with political motivation will not only impact the global financial system but also global trade and regional stability," Albayrak said.

World
Turkey to Retaliate if US Slaps on More Sanctions - Minister
On August 10, US President Donald Trump authorized the doubling of steel and aluminum tariffs on Turkey, up to 50 and 20 percent, respectively, which resulted in the Turkish lira falling to a historic new low.

The announcement led to a sharp drop in the Turkish lira.

In turn, Turkey announced that it was raising levies on several types of US imports, including tobacco, alcohol and cars, among other products.

Tensions between the two countries have also risen due to an Izmir court's rejection to release the US missionary Andrew Brunson, who was arrested in October of 2016 for reportedly playing a role in failed coup attempt.

Washington has introduced sanctions against members of the Turkish government.