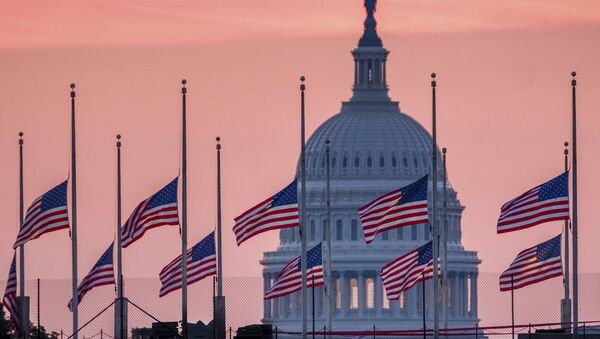 US President Donald Trump released an official statement Monday regarding the passing of Arizona Republican Senator John McCain, stressing he respected the politician for his service to the US.

Trump's statement goes on to say that he has also "signed a proclamation to fly the flag of the United States at half-staff until the day of his interment."

​The remarks were released following reports that Trump ignored questions from reporters about the Arizona senator on Monday and after the White House raised the flag back to full staff around midnight Sunday after dropping it to half-staff to mark McCain's passing Saturday.

The American Legion, a nonprofit veteran organization, bashed the move to raise the flag again so quickly and urged the White House to "follow long established protocol following the death of prominent government officials." Images shared on social media showed the White House's flag dropped back to half-staff later on Monday.

​Although Trump did fire off a tweet on Saturday to offer his condolences, the president reportedly initially rejected recommendations to release an official statement on the senator's death, according to the Washington Post. Trump and McCain had a long history of clashing with one another, one that dated as far back to Trump's first days on the campaign trail in 2015. After McCain criticized Trump for claiming that Mexican immigrants were "rapists," Trump shot back at McCain during a campaign stop in Iowa, telling supporters that the Vietnam War veteran, who spent years in a Vietnamese prisoner of war camp, was not a war hero.

McCain's family announced on Friday that the senator, who was diagnosed with brain cancer in 2017, had decided to discontinue his medical treatment. McCain died the following day.