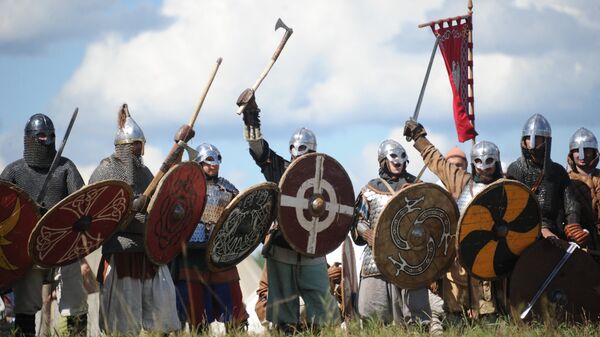 © Sputnik / Kirill Kallinikov
/
Go to the mediabank
Subscribe
International
India
Africa
According to the Swedish research community, the new findings from Sweden's medieval capital of Sigtuna, dubbed the "Viking Age Scandinavian Shanghai," challenge the stereotype of Norsemen as being emigrants and invaders.

No fewer than half of the population of the Viking town of Sigtuna were immigrants, a new DNA analysis of human remains dating from the 10th to the 12th century has shown.

The study, the largest of its kind so far carried out in Sweden, combined DNA analysis and the strontium analysis of teeth to build a detailed picture of where the people had come from. The study found that approximately 70 per cent of Sigtuna's female population were immigrants, as were 44 percent of the men.

Half of the 38 people whose bones and teeth have been genetically tested came from an array of places, each more remote from the Lake Mälaren area than the next. Apart from fellow Nordic countries Norway and Denmark, the inhabitants' places of origin included places like northern Germany, the British Isles, central Europe, the Baltic States and even Ancient Rus.

According to Maja Krzewinska, the researcher at Stockholm University who was the primary author of the study published in Current Biology, the findings challenge the Vikings' image as being emigrants and invaders.

"We're used to thinking of the Vikings as a travelling kind, and can easily picture the school books with maps and arrows pointing out from Scandinavia, as far as Turkey and America, but not so much in the other direction," Krzewinska said in a press-release issued by the university.

Anders Götherström, a professor of molecular archeology at Stockholm University, described Sigtuna, which during the Viking age was a prominent settlement roughly the same size as contemporary European capitals, as a "Scandinavian Shanghai or London."

"Anyone who wanted to do something, to work their way up in the church or in politics were first forced to come to Sigtuna," Götherström said.

According to Götherström, the genetic diversity of Sigtuna's inhabitants is on par with that of Roman legionaries in England, who hailed from various parts of the Europe and beyond and were an extremely heterogeneous group.

"I especially like that we find second-generation immigrants among the buried," Götherström said, praising Sigtuna's cosmopolitanism.

According to Götherström, one of the leaders of the Atlas project, whose goal is to map out Sweden's demographic history, this proved that ethnic Swedes actually didn't exist.

"Something genetically Swedish isn't a thing," he said, as quoted by the Metro newspaper. "We've pieced ourselves together from parts taken from the whole world, and the more we study this genetically, the more we see that people have been moving around the place the whole time."

Sigtuna, a picturesque lakeside resort of 8,000, was one of Sweden's oldest cities, founded in 980 by the country's first Christian king, Olof Skötkonung.