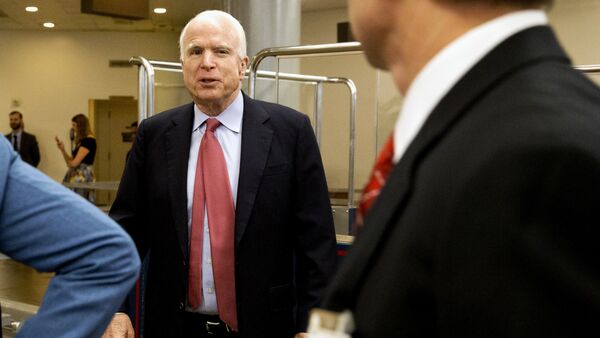 US Republican Senator John McCain, who was a presidential candidate twice, passed away at the age of 81 on Saturday. Sputnik discussed McCain's legacy with Wayne Madsen, an investigative journalist and political analyst based in the US.

Sputnik discussed McCain's demise and the reaction to it with Wayne Madsen, an investigative journalist and political analyst based in the US.

Sputnik: What made Mr. McCain's figure so controversial?

Wayne Madsen: I recall getting to know members of the McCain family, actually, when I worked for John McCain's 2000 campaign, that's when he was running in the Republican Primary against George W. Bush. In those days everyone feared that George W. Bush was going to be the the war candidate, well, everyone was right because of what happened later with Iraq, but John McCain in 2000 was viewed as somebody who was more moderate, almost from the old Nelson Rockefeller wing of the Republican Party, the moderate to liberal wing.

So John McCain had a lot of support in the Primary, even Democrats crossed over and stayed in and supported him in the Republican Primary. However, after a few years we saw John McCain as one of the chief cheerleaders for that Iraq invasion and the mess in Afganistan, and since then he became known for being in favor of intervention in Syria and in Libya, so this was a story of two John McCains, really.

Sputnik: It's very interesting; you're saying that his ideology and his mindset almost changed over the last 10 years or so, why do you think he became a neocon? Why did he become part of this deep state and this liberal ideology that's been very much in focus in the United States administration, especially, in the last 2 to 4 years? What's your take on that?

Wayne Madsen: I think it's politics, he obviously in 2000 had his eyes set on the White House again; he ran in 2008 and that was a much different campaign from what we saw in the Primary in 2000. So we saw him pick, for example, Sarah Palin as his running mate, an individual with no experience whatsoever, she had been mayor in a town in Alaska before becoming governor and people looked at that and wondered if the man had lost his senses, so, of course, he was defeated in that election, and since that time, except for voting to keep some form of health insurance for people, he voted, for example, for Neil Gorsuch.

McCain always claimed he was a great promoter of the environment and Neil Gorsuch is anything but; he wants drilling in national parks, in national land, so we see these two John McCain‘s again, the early John McCain, I do recall that after he was released as a POW in North Vietnam he was a laison officer for the Navy in Congress, he was a Navy captain, and he went in to see Barry Goldwater, whose Senate seat he eventually took over, and Barry Goldwater said: "You know John, had I been elected President in 1964 instead of Lyndon B. Johnson you would've never been a POW in North Vietnam," and he looked at Goldwater and he said: "You're absolutely right Senator, I would've been the POW in China."

So there was that part of McCain, but I think it was largely lost since he ran for President in 2000, and everyone admired the fact that he took on George W. Bush, this pampered child of another President, scion of the Bush family. The Bush family were all New England blue bloods and McCain‘s father and grandfather were both Navy admirals.

READ MORE: John McCain Was the Embodiment of the US Deep State — Journalist

Sputnik: Looking back at the Senator's political carrier, what legacy has Mr. McCain left in US politics and international politics in general? Can you give us a final overview with regard to his career?

Wayne Madsen: I would say that he'll be viewed as one of the last big names in the Senate, there are not many. The ironic thing is that John McCain died of brain cancer on the very same day of the year Ted Kennedy died of the same disease — brain cancer. And Kennedy and McCain were seen as the lions of the Senate, the Democratic lion or the Republican lion. I think with McCain's death we've seen the last of the major forces in the Senate, there used to be a number of them but they don't exist any longer, so he'll be viewed as more of a Senate institution, like Everett Dirksen and others. There's even a move now to rename the Russell office building in Washington after John McCain, Richard Russell being a pro-segregation Senator from Georgia. So I think he'll be look more on as a senatorial institution rather than even a presidential candidate.