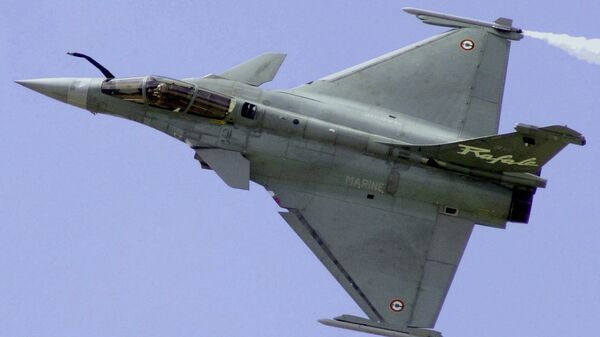 French President Emmanuel Macron commented Monday on the situation in Syria's Idlib as well as on the dependence of the European defense on the US.

France is ready to conduct further airstrikes in Syria in response to Damascus' use of chemical weapons, French President Emmanuel Macron said Monday during his speech to French ambassadors.

"We will continue acting this way if we see new confirmed cases of the chemical weapons use," Macron said.

Macron also noted that he had never insisted on the resignation of Syrian President Bashar Assad in exchange for rendering humanitarian aid to the country. At the same time, the French president suggested that leaving power in the future in the hands of Assad "would be a bad mistake."

"France can't appoint future Syrian leaders…But it is our duty and in our interests to make sure that Syrian people are able to do this," he said.

US Destroyer Can Strike Any Part of Syria From Mediterranean - Russian MoD
Speaking further, the French president said he feared a serious humanitarian crisis in the Syrian province of Idlib, adding that France expected that Russia and Turkey would put pressure on the Syrian authorities in connection with the situation in the province of Idlib.

The French President, however, noted the first results of the joint Russia-French mechanism on the Syrian settlement.

"The mechanism of coordination with Russia, created in St. Petersburg, has produced its first results, in particular in the humanitarian sphere," Macron told ambassadors in Paris, according to his official Twitter account.

The speech comes several days after the Russian Defense Ministry accused the United States, the United Kingdom and France of preparing to carry out new strikes against Syria under the pretext of a false flag, namely, a falsified government chemical weapons attack.

Macron Says 'Not in Favor' of Vast Trade Deal Between EU, US
A group of militants trained under the guidance of a private British military company, Olive, to work with poisonous substances has arrived in Idlib, the Ministry added.

The US, UK, and France coordinated a massive airstrike on Syria in April 2018 after the alleged use of chemical weapons in Douma had been reported by the controversial NGO "White Helmets", which has repeatedly been caught staging false flag attacks.

In April, a number of opposition media, including the aforementioned While Helmets, reported of a chemical attack in the city of Douma. No substantial proof was presented and, as a prompt probe by Russian forces showed, no traces of chemical substances in the area have been found.

Macron revealed a new push for the European defense project, adding that the continent's security shouldn't depend on the US.

"Europe can no longer rely on the United States for its security. It is up to us to guarantee European security," he said in a major speech to relaunch his diplomatic agenda.

At the same time, he stressed that France should build a strategic partnership with Russia and Turkey.

"We cannot build Europe in the long term without thinking about relations with Russia and Turkey… Do we think clearly and frankly today that we can continue to talk about Turkey's membership in the European Union, when every day the Turkish president… reaffirms the pan-Islamic agenda, which seems to be anti-European?… It is necessary, therefore, to build a strategic partnership, not membership in the European Union. Strategic partnership with Russia and Turkey, because these two powers are important for our collective security, they need to be tied to Europe," Macron said.

Macron Reportedly Used Tricks From Trump's Book in Trade Debate With POTUS
Earlier, the European Union said it would spend nearly 20 billion euros on defense between 2021 and 2027, with the bulk of the money to be spent on the research and development of new military technologies.

German Foreign Minister Heiko Maas has urged Europe to react to the US sanctions-related policy on Russia, China, Turkey and other important economic partners.

Recently, Emmanuel Macron proposed an initiative to set up a European military intervention force that could be rapidly deployed in the event of a crisis.