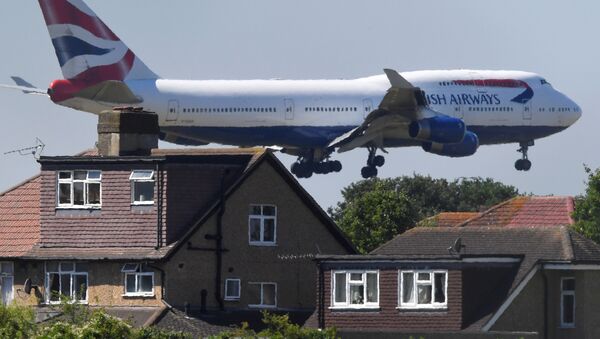 Back in October 2017, UK Chancellor of the Exchequer Philip Hammond admitted that it was "theoretically possible" that the failure by London and Brussels to clinch a Brexit deal would stop air traffic between Britain and the EU.

The London-based Institute for Economic Affairs (IEA) think tank has warned Prime Minister Theresa May that the entire fleet of UK planes may be grounded if the country leaves the EU without signing a specific aviation deal.

"If there are no alternative arrangements in place, it would be as bad as the worst fears suggest: planes would not be allowed to fly," Julian Jessop, the IEA's chief economist, said.

The IEA said in a report that the UK airlines' operating licenses for the 27 countries will be revoked if they fail to clinch a replacement arrangement with the EU's Single Aviation Market (SAM), which currently covers Britain's rights to the so-called "freedoms of the air."

At the same time, the IEA pointed out that the British government will have options even in the event of a no-deal Brexit scenario, which will specifically stipulate the UK joining non-EU countries Norway and Iceland as members of the European Common Aviation Area (ECAA) and negotiating a free trade agreement on aviation.

According to the IEA report, "reasons for optimism" are still in place, which is why the risk of the planes being grounded is "conceivable, but still very unlikely".

"Grounding UK airlines would be hugely damaging for the EU economy, particularly in areas like tourism," the report underscored.

According to Professor Chris Rowley from Kellogg College, University of Oxford, the UK can join non-EU countries Norway and Iceland as members of the European Common Aviation Area (ECAA) and "there is the possible negotiation a free trade agreement on aviation."

In mid-July, International Trade Secretary Liam Fox cautioned that EU leaders forcing Britain into the so-called no-deal Brexit scenario will result in "a consequence for their economies."

Underscoring the need "to have a people's Brexit, not a bureaucrats' Brexit", Fox warned that the possible no-deal scenario will have a negative impact on the "economic prosperity and wellbeing" of EU citizens.

His remarks came after European Commission Chief Brexit Negotiator Michel Barnier cautioned that "on both sides of the Channel" businesses should prepare for the worst case scenario of a "no deal," which would result in the return of tariffs, under World Trade Organization (WTO) rules.

As the deadline for the Brexit agreement is approaching, the parties are still at an impasse on the major withdrawal issue of post-Brexit customs arrangements.

EU Chief Negotiator Slams UK Government for No-Deal Brexit ‘Blame Game’
According to the so-called Chequers plan, adopted by the UK cabinet in July, the sides could create a free trade area for goods and maintain a "common rulebook" for all items, a proposal which has already been rejected by Brussels.

The UK voted to leave the European Union in a referendum in 2016. The Brexit negotiations officially started in June 2017 and are expected to be completed by the end of March 2019.