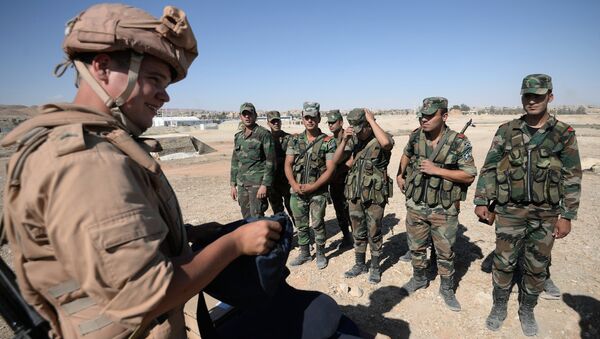 © Sputnik / Mikhail Voskresenskiy
/
Go to the mediabank
Subscribe
International
India
Africa
MOSCOW (Sputnik) - Syrian engineering units disposed 59 explosive devices in the country's Homs Province over the past 24 hours, the Syrian office of the Russian Center for the Reception, Allocation and Accommodation of Refugees said on Sunday.

"Over the past 24 hours, Syrian army engineering units carried on mine clearance operations… in the Homs province, having cleared 4.3 hectares of territory, three buildings and one kilometer of roads. They found and defused 59 explosive devices, including 13 improvised explosive devices," the center said.

To date, Syrian engineers found and defused 7,612 explosive devices including 2,370 improvised explosive devices, in Homs and Damascus provinces, clearing up 262.3 hectares of the territory, 808 buildings and 56.8 kilometers of roads.

The center also noted that over 200 Syrian refugees have returned to their home country from neighboring Lebanon over the same period of time.

"Over the past 24 hours, 202 refugees (61 women and 103 children) returned to Syria from Lebanon through the Jaydet-Yabus checkpoint," the center said in a daily bulletin.

Syria on Verge of Defeating Daesh Terror Group – Ambassador to Russia
According to the refugee center, 714 internally displaced persons (IDPs), including 245 women and 338 children, and 10 pieces of equipment have been evacuated from the Idlib de-escalation zone over the past 24 hours.

Since September 30, 2015, over 1.2 million Syrian IDPs had returned to their homes, the center pointed out.

Syria has been devastated by years of violent civil war which had prompted millions of people to flee hostilities from the areas where they lived to other locations in Syria and outside the country. The war-torn state has been receiving assistance from Russian Center for the Reception, Allocation and Accommodation of Refugees since late July which was initially launched by Moscow to help Syria in the process of the country's transition to peaceful life.