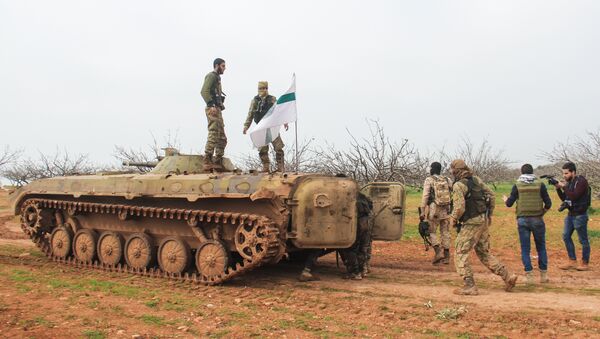 MOSCOW (Sputnik) - Several thousand militants armed with heavy weaponry and armored vehicles are preparing for an offensive on the Syrian provinces of Hama and Aleppo, the Russian Defense Ministry said Saturday.

The ministry said that the leader of the Tahrir al-Sham group (affiliated with the Jabhat Nusra terror organization) called on all militants in the Syrian northwestern province of Idlib to prepare for an offensive against the Syrian government forces.

“Several thousand militants with heavy weaponry and armored vehicles have been gathered for an offensive on Hama and Aleppo,” the Russian center for Syrian reconciliation’s spokesman said.

Syria on Verge of Defeating Daesh Terror Group – Ambassador to Russia
The so-called drills, led by the White Helmets group, on actions “in case of chemical contamination,” are currently being held in the town of Jisr al-Shughur in Idlib, the spokesman noted.

Earlier in the day, Russian Defense Ministry spokesman Maj. Gen. Igor Konashenkov said that the Tahrir al-Sham  militants are preparing a provocation in Idlib to accuse the Syrian government forces of using chemical weapons against civilians. The militants had brought eight canisters with chlorine to stage the chemical attack in Jisr al-Shughur in Idlib. These containers were subsequently handed over to the militants of al-Hizb al-Turkistani al-Islami group and transported to the Haluz village near Jisr al-Shughur, Konashenkov added.

The chemical weapons provocation, currently being prepared by terrorists in Syria, is aimed at allowing France, the United Kingdom and the United States to carry out a strike on Syrian government’s targets, according to the Russian military. For this purpose, USS The Sullivans destroyer with 56 cruise missiles on board arrived in the Persian Gulf several days ago, while a US В-1В bomber carrying 24 air-to-surface AGM-158 JASSM cruise missiles was deployed at Al Udeid air base in Qatar, Konashenkov said earlier in the day.