Three Dead After Gamer Gun Massacre in Jacksonville: The Facts So Far 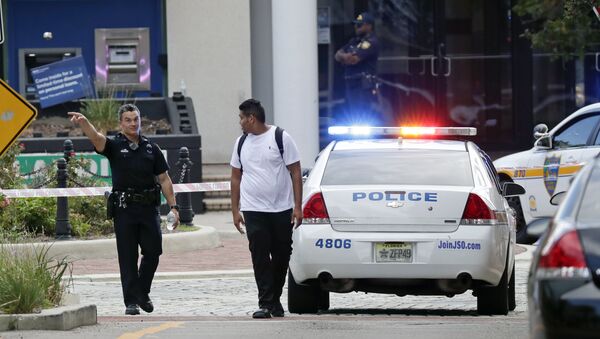 © AP Photo / John Raoux
Subscribe
International
India
Africa
On Sunday, a shooting occurred during a Madden 19 Tournament at the GLHF Game Bar in Jacksonville, Florida. The shooter was confirmed dead after killing two people and injuring at least 9, according to unofficial reports.

The Jacksonville Sheriff's Department called the incident a "mass shooting" in a tweet, noting in a news conference that the shooter, a white male, was alone and was confirmed dead.

The Jacksonville Sheriff announced later that three people were found dead at the scene of the shooting, including the suspect. There were also 9 people wounded. The suspect was identified by the police as a 24-year old David Katz from Baltimore. The police added that the shooter used at least one handgun.

Media staging area is at the Wells Fargo building located at 1 Independent Drive, Jacksonville, facing the landing. We plan to start promptly at 4:30 p.m. PIO Bujeda is on scene. It will be LIVE on our Facebook page. https://t.co/qBJvkaO7xT

The latest information says that three have been killed and 9 injured, one in serious condition, according to doctors at a Jacksonville hospital emergency room.

The Jacksonville Sheriff's Office earlier said that "there are inaccurate numbers being distributed by local and national media."

There are inaccurate numbers being distributed by local and national media. This is fluid and as soon as we have confirmed numbers they will be released. Please remember this Twitter @JSOPIO is the only official source of information. https://t.co/qBJvkaO7xT

One of the witnesses, Javaris Long, told the Tampa Bay Times that he saw a "nerdy” man who got mad because he lost, so he went to his car, got his gun, came back and “started blasting everybody.” On a video posted to YouTube from a livestream of the event, 12 gunshots were heard. Seconds before, a small red dot of what could be a laser gun sight can be seen on the chest of a player on the right.

Game players in the venue got involved, quickly tweeting that they had been taken to the hospital with injuries. Drini Gjoka, 19, at the scene, reported that he had been shot in one of his thumbs.

I am literally so lucky. The bullet hit my thumb

Worst day of my life

Another gamer, 2017 Madden Bowl Champion DUBBY, tweeted that a bullet hit his head.

They took me to the hospital. Bullet grazed my head. I feel fine, just a scratch on my head. Traumatized and devastated.

"Please everyone keep your thoughts and prayers for my brothers," tweeted Shay Kivlen, the 2018 Madden NDL champion. "These guys are my family man. This hurts so much. Please pray."

These guys are my family man. This hurts so much. Please pray

Sujeil Lopez, the mother of one of the injured gamers, told the New York Times that her son, Larry, was delivered to a hospital with three gunshot wounds. "He was shot three times, once on the nipple, once on his hand and somewhere else," Lopez told the Times. Two days earlier Larry posted a video of The GLHF GameBar, detailing the location of the multiplayer tournament.

Steven “Steveyj” Javaruski, a gamer competing in the tournament, told the Los Angeles Times that the shooter was one of the participants, who “targeted a few people” after losing a game. Steven said that after 12 gunshots the shooter killed himself.

The Madden NFL Twitter community recognized at least two of the victims, one identified as Elijah Clayton (@true_818) who was well known among the players. Another victim was identified as 2016 Madden Classic champion Taylor Robertson (@spotmeplzz)

RIP @True__818 Elijah Clayton. One of my best friends in life. I talked to u almost everyday for the last 5 years. U were one of the most kind and genuine people I’ve ever met. I love u like a brother. I’m gonna miss hearing you laugh everyday and seeing your genuine smile. pic.twitter.com/Balk88T1ES

it's not much but I just wanted to make this avi for anyone that wants to use it in memorial of these two. I remember when we use to chance our avis to show support for players. thoughts and prayers are with their families. rest in peace. pic.twitter.com/5t8LAguPy0

This is a horrible situation, and our deepest sympathies go out to all involved.

The company was criticized by many enraged users online for not providing any form of security at their cybersport tournaments:

Where was the security???!! How was there no protection?!? Lives were LOST because of your negligence EA. That shits pathetic.

Prayers to them, continue praying. But EA, please listen and if you have any control of any event, please get some security / armed security and have searches go down, We must stop or try to prevent things like this from happening 🙏🏽

The Jacksonville Police Department, at 7:15, updated its information, revealing that the single suspect's identity is David Katz. The police didn't reveal motives in the interests of investigation, but the Fox News sources saidthat Katz "reacted to losing with violence."

Katz was suspected to be the shooter even before the police announcement. The 2017 Buffalo Bills Madden Club Champion used the nicknames "Bread", "MrSlicedBread", "RavensChamp" and "Ravens2012Champ."

David Katz, the suspect in the Jacksonville shooting, has been playing Madden competitively for several years using the names MrSlicedBread, Bread, ravenschamp and ravens2012champ. He won a Buffalo Bills Madden club championship in 2017: https://t.co/59AVRvmjR8 pic.twitter.com/LzgUk8Vjnc

The Sheriff's Office confirmed that 9 people were delivered to the hospital, with 7 having gun wounds. The police are yet to confirm the identities of two fatal victims and is looking for more possible video footages of the shootings.