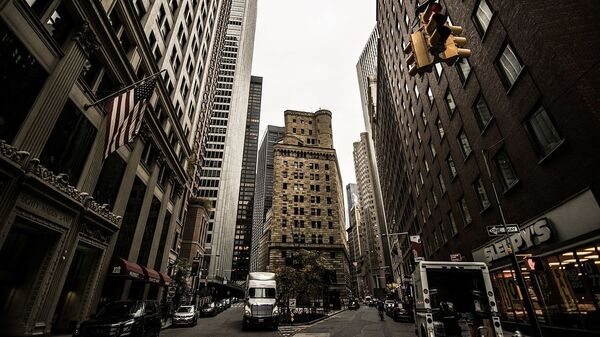 CC BY-SA 4.0 / 0x010C / Federal Reserve Bank of New York
Subscribe
International
India
Africa
US central bankers have discussed the economy and monetary policy at a conference in Jackson Hole, Wyoming, with some advocating for further tightening of monetary conditions, and others pointing to the elevated risks to macroeconomic stability as a reason to take a softer stance.

Kristian Rouz — Chairman of the Federal Reserve Jerome Powell is defending the path of gradual interest rate hikes just weeks after US President Donald Trump said he wasn't "thrilled" about the policy. Powell said the ongoing normalization of monetary conditions would make the economy more sustainable.

But some members of the Fed Board of Governors disagree.

Academic on How Trump's Tweet May Damage South Africa’s Economy
During a conference in Jackson Hole, Wyoming this past Friday, Fed Chair Powell said higher interest rates are making the economy healthier by staving off the risks of overheating and asset bubbles. Powell also stressed further increases in base borrowing costs would continue as long as economic growth keeps its momentum.

"The economy is strong. Inflation is near our 2 percent objective, and most people who want a job are finding one." Powell said. "If the strong growth in income and jobs continues, further gradual increases in the target range for the federal funds rate will likely be appropriate."

"Because we go up and every time you go up they want to raise rates again," Trump said. "I don't really — I am not happy about it. But at the same time I'm letting them do what they feel is best."

"In the run-up to the past two recessions, destabilizing excesses appeared mainly in financial markets rather than in inflation," he pointed out. "Thus, risk management suggests looking beyond inflation for signs of excesses."

Such excesses stem from the accommodative fiscal policies of the current administration, as well as the ongoing deregulation effort. Lower taxes, looser regulation, and a greater freedom of enterprise typically support economic expansion, but all these also contribute to a higher volatility in the financial markets, higher inflation, and higher asset prices.

Chasing Trump Impeachment Disrupts US Politics More than So-Called Collusion
Powell stressed the central bank's policy approach remains data-dependent, and every decision to raise rates or leave them unchanged comes after a fresh batch of inflation and employment data. The Fed Chair stressed this allows them to minimize the risk of policy mistakes that could actually hurt GDP growth.

However, President of the Federal Reserve Bank of St. Louis James Bullard urged his fellow board members to halt rate hikes for a while. Bullard said inflation has not increased significantly over the past year — despite the massive fiscal stimulus and deregulation.

The St. Louis Fed President also suggested next year the positive effects of Trump's tax cuts will start to gradually wear out, and economic growth would likely moderate. In light of this, higher borrowing costs might have an adverse effect on the economy, Bullard said.

"If it was just me I'd stand pat where we are and I'd try to react to data as it comes in," Bullard said. "I just don't see much inflation pressure."

US Federal Reserve Expects Further Interest Rate Increases - Powell
Central bankers are also expecting the White House to implement a second round of tax cuts, which would provide additional relief to the private sector. In this way, the risks of elevated inflation and overvalued stocks are pressuring the Fed to keep normalizing monetary conditions.

Powell said there is still a lot of uncertainty in the economy. Possible downside effects of the trade war with China, perplexing bond market dynamics (including the supposedly inverting yield curve), and the ongoing rally in the already-overpriced stocks are all causing concern.

Additionally, it is not clear whether the Trump administration and Congressional Republicans will deepen the tax cuts.

"When you are uncertain about the effects of your actions, you should move conservatively," he said. "In other words, when unsure of the potency of a medicine, start with a somewhat smaller dose."