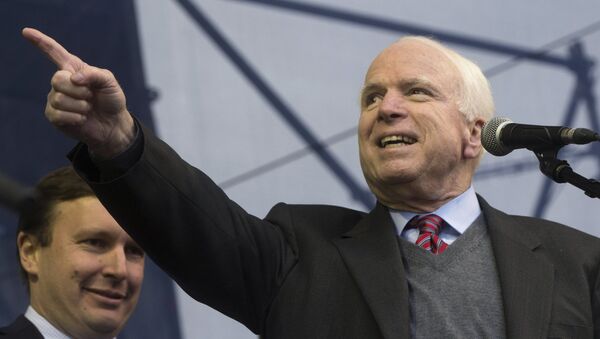 © Sputnik / Iliya Pitalev
/
Go to the mediabank
Subscribe
International
India
Africa
On August 24 McCain's family announced that the veteran senator had decided to end his treatment for brain cancer, citing its reduced efficiency due to his age and aggressiveness of the glioblastoma.

While speaking at a Republican Party dinner in Ohio on August 24 US President Donald Trump failed to mention one specific Republican senator, John McCain. The senior senator from Arizona is suffering from terminal brain cancer and recently announced that he is abandoning treatment. At the function, Trump touched upon a broad spectrum of issues, such as the murder of Iowa college student Mollie Tibbetts by an illegal migrant, Democrats' migration policy and even mentioning Kim Kardashian-West, calling her "a good wife."

According to the Washington Times, citing an anonymous source in the White House, Trump does not intend to "comment on McCain before he dies."

This lack of attention to a fellow Republican, who happens to be dying, didn't go unnoticed by US politicians and social media users who took to Twitter to express their fury at Trump's "lack of compassion."

This man is the stupidest, most repulsive, most cold-hearted reptile in our beleaguered world. Shame! https://t.co/M353UTMYM9

Twitterians recalled his caustic comment from 2015, when he said he doesn't think of McCain as a war hero, and suggested that Trump should apologize for that now.

Trump has never made a public apology for his terrible comments about Senator John McCain. A more decent and honorable person would have apologized long ago.

Some noted that Democrats were especially active in scolding Trump's silence on McCain's condition.

Democrats are praising John McCain's time in the military.

Republicans are silent, treating McCain like an enemy, because Trump hates him. Disgraceful.

READ MORE: Trump Under Fire for Failing to Mention McCain When Signing His Signature Bill

Many Twitter users noted that there was nothing surprising in Trump's actions as the two men didn't especially like each other. They also suggested that even if he were to say something it was unlikely that it would be sincere.

If you can not say something nice do not say anything at all. Thease men dislike each other. Just be bigger and let it go.

you're asking an awful lot out of someone who has no heart and no compassion at all, why should anyone expect trump to say anything about McCain, he wouldn't mean it

Because if he had said something, the media would have been all over him because they would have felt it wasn't enough or sincere enough. He can't win so why bother

At the same time there were those, who scolded the hyped up attention to what Trump failed to mention in his speech.

Oh look, yet another celebrity thinks their opinion about Trump matters! You know what they say about opinions?

Several Twitterians tried to recall that John McCain had had his own bad moments, suggesting it wasn't correct to just forget about that because the man is dying or because he is not on good terms with Trump.

We don't have to be nice to people responsible for great suffering just because they're dying.

All valid points but 2. especially gets me. He heavily relied on healthcare and yet denied the same chances to millions.

He can go to hell. People like him have the blood of countless innocent lives on their hands.

Stop politicizing everything. You people are pushing us out of the party. Js #WalkAway #WalkAwayCampaign

Still many used the incident to actually agitate people to vote against the Republicans in the upcoming elections.

Please please vote in November for Dems.. What a circus this Trump admin is

And trump was always this petty and foolish. This is what the RNC jumped on for the highest elected office in our country? Vote BLUE in the midterms!

Trump and McCain have had difficult relations since 2015, when Trump said he doesn't consider the Republican senator a hero, because he was captured. He also failed to mention his name during the announcement of the Defense Authorization Act, which was named after the senator.

READ MORE: US Senator McCain Calls for Input of Both Democrats, Conservatives on Obamacare

McCain has opposed several of Trump's initiatives and even appointments. He, notably, helped organize opposition against the repeal of Obamacare, urging both parties to vote against Trump's initiative. He also opposed Gina Haspel's nomination as a head of the CIA in 2018. According to media reports, McCain doesn't want Trump to attend his funeral, when he dies.