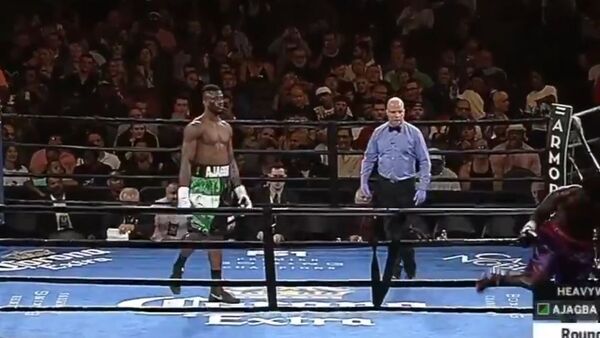 © Photo : Twitter, SportsCenter
Subscribe
International
India
Africa
With his gesture, the American boxer tried to convey a message to the fight's organizers that he felt disrespected.

American heavyweight boxer Curtis Harper refused to box and left the ring immediately after the bell sounded in Round 1 of his bout with Nigerian Efe Ajagba on August 24. A video of the incident has been published by SportsCenter on its Twitter account.

With his gesture, the American boxer tried to convey a message to the fight's organizers that he felt disrespected because of the miserly amount of money he was being paid to fight with the Nigerian boxer, journalist Jordan Hardy explained later.

"If y'all are wondering I spoke to Harper and he said he walked out of the ring because he's not getting paid enough to fight and that he wants respect," Hardy posted on Twitter.

Efe Ajagba is an up and coming star in the heavyweight class of boxing.

The bell rang, and Curtis Harper walked right out of the ring.

He wanted to "make a statement" because he felt he wasn't getting paid enough for the bout, according to @PBCJordanHardy. pic.twitter.com/tHgTE1PPyx