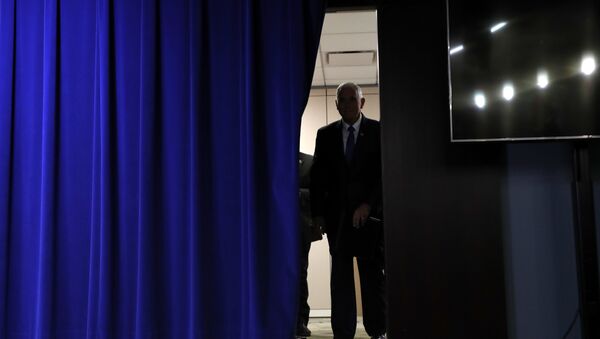 US Vice-President Mike Pence has kept mum about last week’s outpouring of new charges, convictions, allegations and testimony against his boss President Donald Trump and his bosses’ administration and closest advisors.

“Et Tu, Brute”?: An Increasingly Isolated Trump Sees Close Advisors Turn Traitor
In Texas on Wednesday, during an abbreviated showdown between the press and Pence, the VP used only non-verbal non-responses in reply to questions about plea deals and convictions against several of Trump's closest longtime advisors.

Over the course of a two-day Wednesday and Thursday junket in Texas and Louisiana, Pence was repeatedly asked for a statement regarding the potential blowback of the conviction of Trump's former campaign chairman for bank and income tax fraud and a long-awaited plea deal from POTUS's long-swerving lawyer and fixer, Michael Cohen.

As Pence's US Air Force Two revved its engines on the Texas tarmac, the VP avoided any form of reaction to pointed inquiries from the press as to whether apparent betrayals by Trump's closest advisors and staff could potentially lead to the impeachment or resignation of the 45th president — a turn of events that would thrust the nation's number two politician into the number one spot.

The vice-president has been noted for his avoidance of the seemingly endless bouts of dramatic and diverting palace intrigue flowing from the Trump White House.

Pence previously denied knowledge of former White House staff secretary Rob Porter's firing after allegations of spousal abuse surfaced — and appeared to be out of the loop on many other administration goings-on, answering only that he was ‘honored to serve the President,' cited by C-Span.org.

According to an unnamed source close to Pence, the VP has a preference for being away from Capitol Hill, attending Republican fundraisers and staged photo-ops around the country in support of Trump policies, cited by CNN.

Another longtime aide to Pence, who wished to remain anonymous as he is not authorized to speak, stated that the consistently conservative, Christian evangelical and anti-gay politician "likes to be out," noting that, as former governor of Indiana, Pence traveled a minimum of "two to three days a week."

"He's taking to it pretty well now that he's VP," added the source, cited by CNN.

But Pence's silence on the potentially shattering scandals unfolding around the increasingly beleaguered Trump has many considering that the midwest lawmaker is biding his time and staying out of the fray as a means to cement control when, not if, the rule of the 45th president comes to an abrupt and early end.

"Ducking stories is better than him coming out and throwing gas on the fire," asserted a Pence senior adviser, who claimed that the VP is simply "adding value" to the Trump administration by supporting Republican midterm candidates, cited by CNN.

Pence spokeswoman Alyssa Farah on Friday diverted press inquiries into Pence's silence back on Trump, stating that POTUS had "already addressed that matter," and adding that the VP would only be "advancing the president's agenda" for "reelecting Republican majorities in the House and Senate," according to a CNN report.