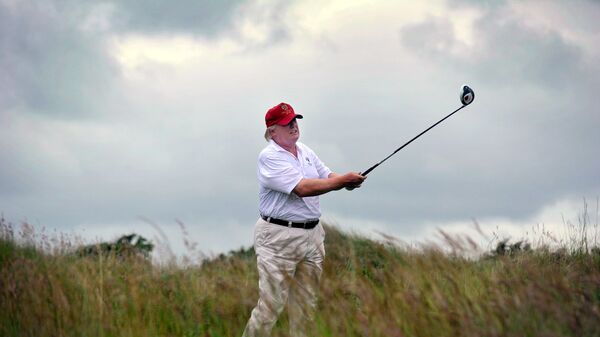 © AFP 2023 / Andy Buchanan
Subscribe
International
India
Africa
Nice work, if you can get it.

“Et Tu, Brute”?: An Increasingly Isolated Trump Sees Close Advisors Turn Traitor
In office now for the 582 days, US President Donald Trump arrived at his Trump National Golf Club in Sterling, Virginia, on Saturday, bringing to 150 the number of days he has been in power that have been spent at a golf club he owns. That's over 25 percent of time spent in office to date.

Saturday's visit by the US president to a personally-owned luxury facility only accessible to the very rich marks Trump's 193rd day at a property or facility that he owns. That's makes it about one-third of the time that POTUS #45 has been in office.

Work is for suckers, right?

Just prior to the end of July, it was suggested that Trump had spent an estimated 110 of those resort days away from the hustle and bustle of an increasingly hostile Washington DC actually golfing, according to the Washington Post.

It is not possible to be certain whether the president was actually out on the links, because the White House often refuses to reveal what Trump is doing, and who he is doing it with, cited by Newsweek.

Visits by Trump to any number of his own properties, not only those lush green golf courses, is higher, claims an exhaustive tracking of presidential movements since he took office on January 20, 2017, according to NBC News.

While on the campaign trial, candidate-Trump enjoyed calling out US President Barack Obama for the latter's golf games, although, at the same point in his tenure, Obama had made 44 trips to a golf course, as opposed to Trump's 150.

If he can keep up his current hectic schedule, Trump is on track to spend roughly 322 days of a single four-year term at a golf course, a number significantly exceeding the total of 306 days that Obama spent on a golf course during eight years in power.

While campaigning, candidate-Trump repeatedly declared that if he were to become president, he would not "have time to go play golf," cited by Politico.