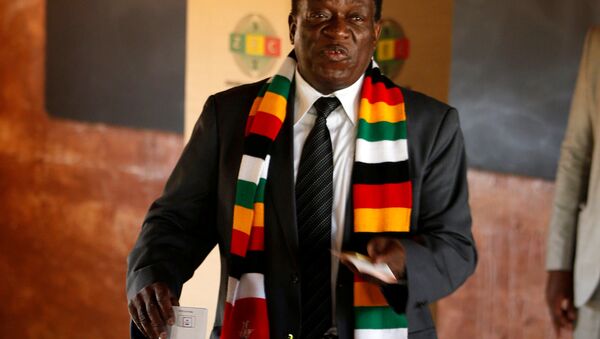 MOSCOW (Sputnik) - The Zimbabwean Constitutional Court has confirmed Emmerson Mnangagwa's victory on July 30 presidential election following a legal challenge from the opposition, the News24 broadcaster reported, adding that the ruling was unanimous.

Chairman of the opposition Movement for Democratic Change (MDC) Morgan Komichi told the media that the party leadership would meet to consider the next steps.

I once again reiterate my call for peace and unity above all. Nelson Chamisa, my door is open and my arms are outstretched, we are one nation, and we must put our nation first. Let us all now put our differences behind us. It is time to move forward together. (4/4)

The general elections in Zimbabwe were held on July 30. Residents of the country chose the president and members of both houses of parliament.

Zimbabwe Needs to Move Away From Mugabe's Policies to Boost Economy - Analyst
Zimbabwe African National Union-Patriotic Front leader Emmerson Mnangagwa won the elections, receiving 50.8% of the vote. His main rival, leader of the Movement for Democratic Change (MDC) party Nelson Chamisa has received 44.3% of the vote.

Riots and protests with shooting have begun in Harare amid the announcement of the election results in the parliament. To disperse the protesters, Zimbabwe police used tear gas and water cannons, as well as the military equipment. As a result of clashes between police and protesters, six people were killed and 14 others were injured.