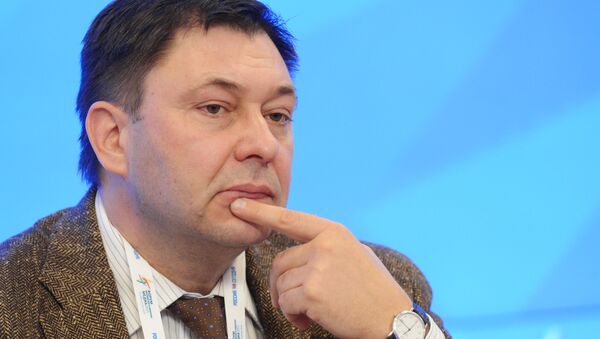 MOSCOW (Sputnik) - Kiev does not allow Russian diplomats to meet with arrested RIA Novosti Ukraine portal head Kirill Vyshinsky, citing his dual citizenship, this infringes upon his rights, the Russian Foreign Ministry said in a statement.

"There is no reason to hope for an improvement in the situation and bringing it in line with Ukraine's international obligations, which was confirmed by the refusal of the appeals court to release K.V. Vyshinsky on bail. The actual violation of the rights of the Russian journalist, whom the authorities do not allow to meet with Russian consular officers, citing his Ukrainian citizenship, in addition to Russian, continues," it said.

The Russian Foreign Ministry says it will keep the development of the situation under constant control and provide every possible assistance to K. Vyshinsky.

Friday marks the 100th day since the arrest of Kirill Vyshinsky, the head of the RIA Novosti Ukraine portal, by Ukrainian authorities.

"Today marks the 100th day since the arrest of Kirill Vyshinsky. In this regard, I have some questions. To Ukraine: do you really think that the more journalists you keep in your jails, the closer you bright European future becomes? To Europe: aren't you aware or maybe you forgot, didn't notice or were told not to notice; or maybe you, too, now think that treason charges for journalistic work are okay?" RT and Sputnik Editor-in-Chief Margarita Simonyan said on Friday.

Harlem Desir, the OSCE representative on freedom of the media, has also expressed his concern over the SBU's actions, stressing that, under the Helsinki Final Act, the OSCE states "have committed to facilitating the conditions under which journalists from one participating State exercise their profession in another participating State."

First Vice-Speaker of the Ukrainian parliament Iryna Herashchenko said in July that Ukraine was ready to consider a prisoner exchange with Russia that would include Vyshinsky.

On May 15, the Security Service of Ukraine (SBU) broke into the office of the RIA Novosti Ukraine portal in Kiev and detained Vyshinsky on suspicion of supporting the self-proclaimed people’s republics of Donetsk and Lugansk, as well as treason. On May 17, the court in Kherson ruled that Vyshinsky should be arrested for 60 days without bail.

On July 13, the court prolonged the arrest for two months until September 13, but the term was later shortened to end on September 8.