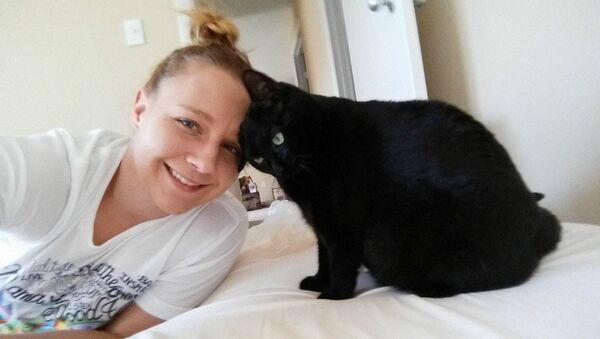 Reality Winner, a 26-year-old former National Security Agency contractor, was sentenced to more than five years in prison on Thursday after she pleaded guilty in June to charges under the 1917 Espionage Act. Winner leaked a classified document detailing alleged Russian election intrusion to The Intercept in 2017.

"When I was there, everything moved very quickly, swiftly, as Reality Winner — first she was brought in; of course she was in her orange jumpsuit because she's not allowed to be in civilian clothes, and it said ‘inmate' on it, and she's got her hands cuffed behind her back; they take it off," Kevin Gosztola, managing editor of Shadowproof.com, told Radio Sputnik's Loud & Clear Thursday.

"She stood at a lectern and faced the judge, and the whole process proceeded in a little less than an hour, I would say, with the defense making statements to the judge about the plea agreement of 63 months in prison, which is five years and three months, and the prosecutor saying why it was important for Reality to be jailed; the judge making some general statements about the seriousness of the offense and the need to promote so-called ‘respect for the law' and deter further actions," Gosztola told host Brian Becker and Sputnik News' Walter Smolarek.

​The document Winner gave to The Intercept contained an NSA assessment of an alleged Russian hacking effort into US voting infrastructure days before the 2016 election. The document did not allege the hack altered any votes, but according to The Intercept, it "raises the possibility that Russian hacking may have breached at least some elements of the voting system, with disconcertingly uncertain results."

At the sentencing hearing, "they went through details of the probation that she'll go through; she'll have three years of supervised release after she is released. And, importantly, they talked about the facility where she'll be incarcerated, a federal medical center. It's called FMC Carswell, and it's in Fort Worth Texas, which is not too far from where her family is," Gosztola said.

Winner was caught leaking the document because when an NSA employee prints one, microscopic markings indicate who printed it. After Winner sent it to The Intercept, the journalists working on the story forwarded it directly to the NSA for confirmation. The agency then alerted the FBI, which arrested Winner within days.

That the markings are left on NSA documents is something "every journalist who purports to be a specialist in national security ought to know," CIA whistleblower and Loud & Clear cohost John Kiriakou noted in June 2017 in an article for Reader Supported News.

"We're talking about a single charge for a single document that was sent [via] snail mail, that did not involve a computer — because if it involved a computer she could have been charged with abusing or misusing a government computer, which is what happened to Chelsea Manning," Gosztola said. "And it was to one media outlet; it wasn't to many different media outlets."

Department of Justice (DOJ) representatives attended Winner's hearing. They told the courtroom that her sentence is the longest one ever given to somebody who passed confidential material to a media outlet, Gosztola said. According to the reporter, the DOJ reps "noted that they were very pleased with it."

"They looked at the press, and they said, ‘We are not going to take any questions,' which basically led me to tune out most of what they said, because I didn't like that they wouldn't take questions from the press," Gosztola, who has been following Winner's case for some time, vented.

Assange: Reality Winner 'Accused of Courage in Trying to Help US Know'

"I think there's every indication that this is a product of a Justice Department that is much more vicious towards whistleblowers than even the Obama administration, but we have to be clear here. I think, in judging the US government, you have to note the continuity, that not a lot is that much different than when [Barack] Obama was president. It's just that the tools can be used much more aggressively," he told Loud & Clear, pointing to the sentences handed down to Kiriakou and fellow CIA whistleblower Jeffrey Sterling (both were given three and a half years in prison).

"So Donald Trump is seeing how the Justice Department was able to take advantage of the Espionage Act, how they were able to pursue leaks. There were a lot of innovations that were put into place" after Chelsea Manning and Edward Snowden blew the whistle, Gosztola said.