Arrests Made as US University Vows to Restore Toppled Confederate Monument 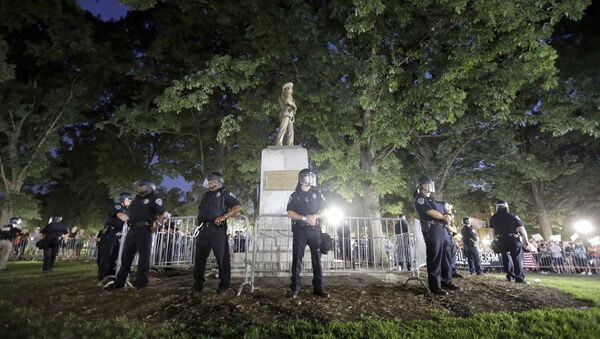 © AP Photo / Gerry Broome
Subscribe
International
India
Africa
The “Silent Sam” Confederacy monument at University of North Carolina at Chapel Hill (UNC) that was torn down on Monday will be erected once again within 90 days in accordance with state law.

UNC System Board of Governors member Thom Goolsby took to Twitter to condemn the toppling of the statue. "A statue was torn down by a violent mob, and the police stood by and did nothing," he said.

"Also, please be aware that North Carolina General Statute 100-2.1 requires that the Silent Sam memorial be placed back on the campus within 90 days of it being pulled down," Goolsby said. "We will not allow anarchy to reign on our campuses."

About 300 people protested on Monday in support of Maya Little, a UNC doctoral student who was charged with property destruction and faced potential expulsion after she poured her own blood on the statue during a protest back in April.

The monument represents "a legacy of oppression and slavery that was the foundation not only of this university but the whole region," a grad student said. It "communicates to students of color that this university is more interested in preserving white supremacy than creating a community of openness."

On Thursday, UNC police charged three people, who were not students at the school, with misdemeanor rioting and defacement of public property. The school spends more than $620,000 surveilling the statue yearly in order to protect it from defacement, UNC Police Chief Jeff McCracken estimated in August 2017 in a letter to UNC Chancellor Carol Folt. That same month, ralliers in Charlottesville, Virginia, bloodied Black Lives Matter protesters and antifascists while they were protesting the city's decision to remove a statue of Confederate general Robert E. Lee. One woman was killed and 19 were injured in a car attack as well.

In 2015, the North Carolina General Assembly passed Senate Bill 22, which barred the removal, relocation or alteration of state-owned monuments and memorials by local authorities.

The Silent Sam monument was erected in 1913 and paid for mostly by the Daughters of the Confederacy group. UNC alumni and the university itself also chipped in.

Julian Carr, a former student at UNC and a former Confederate soldier, spoke at the unveiling of the statue, calling on younger generations to note "what the Confederate soldier meant to the welfare of the Anglo Saxon race during the four years immediately succeeding the war."

"Their courage and steadfastness saved the very life of the Anglo Saxon race in the South," he added. Approximately 258,000 Confederate men died in the civil war, according to demographic historian J. David Hacker. The South fought in the war to preserve slavery.

"Julian Carr unambiguously urged his audience to devote themselves to the maintenance of white supremacy with the same vigor that their Confederate ancestors had defended slavery," wrote UNC history professor W. Fitzhugh Brundage recently.

During Carr's speech, he noted that "one hundred yards" from his audience, he had "horsewhipped a negro wench until her skirts hung in shreds because she had maligned and insulted a Southern lady."

The statue "advocates violence against us," Maya Little said at the rally. It "honors slave owners," she said, adding that she's been threatened with being lynched next to the monument.