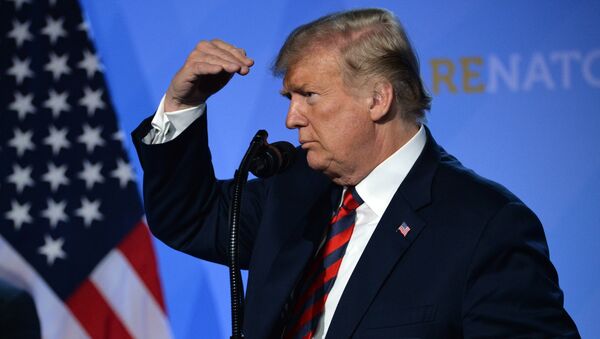 An anti-Trump billboard was put up in New Jersey shortly after US President Trump’s former lawyer Michael Cohen pleaded guilty on eight counts of finance fraud, in part pertaining to the 2016 presidential campaign and hinting at the president’s involvement in a felony.

According to Neil Harrison, who had initiated the move, the billboard that describes Trump as “our leader, the idiot” cost him nearly $1,000. The Twitter community naturally rushed to comment on this, with many reposting the news and offering their assessments.

“Truth!!” one lady emotionally exclaimed, with another one reiterating the idea saying that there should be more of these billboards around:

An anti-Trump billboard was put up in New Jersey one day after Trump’s former longtime lawyer Michael Cohen’s pleaded guilty to 8 counts of fraud & campaign finance violations & implicated the president in a felony, reading: "Our leader the idiot." Truth!! https://t.co/bMUKHFUjwX

One Twitter account even features statistics on the extent to which the news is currently trending in the media and social networks.

However, there were also voices against the move, with one person noting such a billboard is “a disgrace,” traditionally picking up the “crooked Hillary” rhetoric in this context:

The Anti-Trump billboard is a disgrace to tell the country how our leader is a idiot! This means for all those American who voted for Trump choose a Great President over a crooked and corrupted low life crazy lady that was obsess to take over the White House! pic.twitter.com/o6Ltae9a4W

Anyone that would put up a billboard like this about our President is an IDIOT. President Trump has done and will do more for America than any other President in history.

On Tuesday, Cohen, Trump’s longtime associate, entered a guilty plea in New York in which he said he broke campaign finance laws at the direction of “a candidate for federal office," thereby implying Trump without explicitly stating his name. He also discussed having paid “hush money” to silence two women speaking out about Trump’s alleged extramarital affairs.

The development came minutes before Trump’s former campaign manager Paul Manafort was found guilty on eight charges of bank and tax fraud by a jury in Virginia.