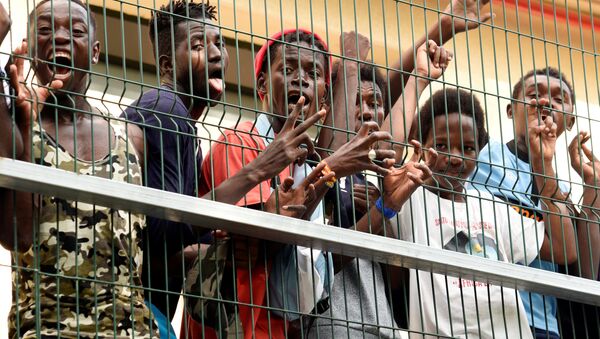 Migrants regularly gather in large groups to try and make it to Spain's enclaves in Morocco in order to end up on European land, despite the fact that some of them are repatriated later by migration services.

At least seven Spanish policemen in the enclave of Ceuta received acid burns after a group of roughly 300 migrants stormed the border fences with some of them hurling bottles with quicklime at law enforcement, AP reported on August 22. Some 116 migrants made it to the other side; many of them injured by the razor wire from the fences, and arrived at Ceuta's temporary migrant reception center. The assault went unnoticed by the Moroccan police as most of the force was occupied by a prayer ceremony marking the start of the Muslim holiday Eid al-Adha.

This is not the first assault on Spain's borders in Morocco. A month ago over 600 migrants managed to get through the fences to Ceuta, the biggest assault so far this year. Another Spanish enclave in Morocco, Melilla, also regularly suffers from surges of Sub-Saharan migrants illegally crossing the border between the countries. Both enclaves recently received reinforcements, but this still hasn't stopped the flow of migrants. Many of them still hope to make it to the other side of the fence and reach the temporary reception center, although some of them are later repatriated by migration services.