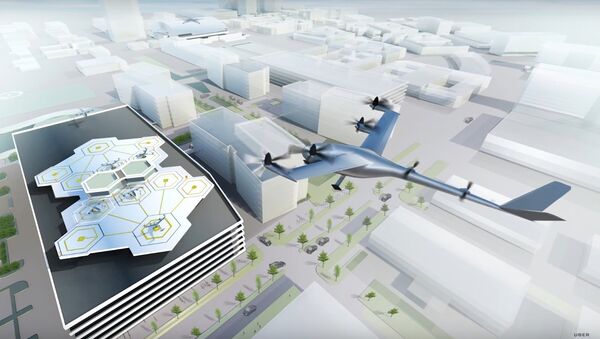 Uber and the US Army have taken a major step toward developing autonomous vertical takeoff and landing (VTOL) aircraft that can be used for shuffling people to and from work - or to and from the battlefield.

On August 9, the US Army Research Laboratory (ARL) and transportation company Uber Elevate — Uber's flying car division — christened their partnership at the University of Texas at Austin with several days of planning and presentations that featured UT aeronautical experts.

"UT is uniquely positioned to contribute to this new technology, and Uber has recognized that," said Jayant Sirohi, associate professor in UT's Department of Aerospace Engineering and Engineering Mechanics and the UT team leader on the project, according to UT News. "In addition to the technical expertise we bring to this area, we also already have a rig to test new rotor configurations right here on campus."

Uber announced in May its partnership with the Army to develop an ultra-quiet VTOL aircraft that could be used as a taxi, Sputnik reported, just as it was also announcing the Urban Air Mobility Project with NASA to create a system that would govern the skylanes to make those aerial taxis work. ARL and Uber will split a $1 million government grant evenly for the project.

"Achieving ultra-low noise is one of the critical obstacles" to deploying aerial taxis in urban areas, Rob McDonald, head of vehicle engineering for Uber Elevate, said in an interview.

Uber and ARL have been operating so far under the assumption that their quest has an easy solution, according to Defense One: a stacked, two-rotor system that computer simulations say should make taking off and landing vertically both easy and safe.

"From a technology perspective, we are still very far from the mass-produced flying cars that ‘The Jetsons' and early Space Age futurist pop culture promised us," web developer and technologist Chris Garaffa told Sputnik Thursday. "Some of the advances in self-driving car technology could be useful here, but that is an area where progress is being made… it's still too early to be viable on a mass scale. Uber has spent a significant sum of money on self-driving cars and is currently doing some open-road testing in Pittsburgh, PA."

Where civilian development of George Jetson's flying car has struggled to become more than a novel prototype, military development of the technology could streamline the system for use by the public.

"This agreement with Uber displays the Army utilizing innovative approaches to collaborate with an industry partner that is truly on the cutting edge," Jaret Riddick, director of the ARL's Vehicle Technology Directorate, told Defense One. "This collaboration is an opportunity to access years of knowledge vested in subject matter experts within the lab. It will allow the Army to rapidly advance mutually beneficial technology to inform objectives for silent and efficient VTOL, or vertical takeoff and landing operation, for the next generation fleet of Army unmanned air vehicles. This supports the Army modernization priorities for future vertical lift aircraft."

Garaffa pointed out that "advances in technology via military or NASA research have frequently led to civilian applications of that technology: GPS and the internet itself are just two examples of that vast portfolio. We might see a similar transfer of some of that technology here, but the incorporation of Uber into this research could lead to the continued privatization of knowledge that should be in the public domain."

Perhaps it's surprising to hear that Uber, a service most commonly used for ridesharing or food delivery, is partnering with the US military and space agency. But "many private corporations — even those outside the immediate military-industrial complex — benefit greatly from partnerships with the US government," Garaffa pointed out. "As an example, Salesforce and other companies have come under fire for their partnerships with ICE [US Immigration and Customs Enforcement] while that agency faces intense criticism for its family separation and detention programs. During World War II, IBM [was] supplying the Nazi regime with punch card tabulating machines to speed up their analysis of census data to identify Jewish, Roma and gay individuals to be rounded up."

"Ultimately the motives are financial gain on the part of the private companies involved, and for the government, it is slashing public funding for scientific research in favor of giving contracts to those same companies."