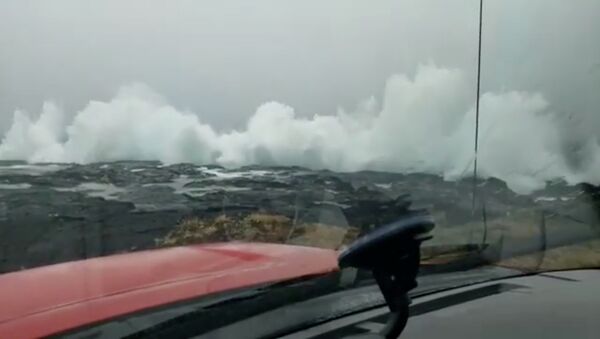 The Hawaiian Islands are bracing for one of the most threatening storms in decades as the outer bands of Hurricane Lane pound the Big Island.

A hurricane hasn't made landfall on any of the Hawaiian Islands since 1992, when Hurricane Iniki killed six people and destroyed 14,000 homes. The Category 4 Hurricane Lane isn't forecast to make a direct hit on the islands, but with the massive storm poised roughly 200 miles south-southwest of the island of Hawaii, also known as the Big Island, residents are still very wary.

"Be prepared to shelter in place with 14 days of food supplies and water and any other necessities," Hawaii Gov. David Ige said at a news conference Wednesday.

​All eight main islands — Hawaii, Kaui, Maui, Oahu, Molokai, Lanai, Niihau and Kaho'olawe — are under weather alerts, according to the National Weather Service. The Big Island, Maui and Oahu have hurricane warnings, and Kauai and Niihau are under hurricane watches, meaning they may experience some of the effects of a hurricane in the next 48 hours.

The storm has weakened from the Category 5 it was earlier this week, but its core still sports dangerously strong 130 mph winds, and tropical storm force winds (39-73 mph) extend out more than 140 miles from the center. Still further are the storms rain bands, which have already dumped a foot of rain on the Big Island, the National Weather Service office in Honolulu (which is on Oahu) said, with another 1 to 2 inches falling every hour.

Lane is relentless. So much water out here, I'm glad we have good drainage. My neighbor's yard across the way is all flooded. Grateful we aren't experiencing high winds. 🚿🌧🌀☔#HurricaneLane #hiwx #HamakuaCoast #BigIsland #Hawaii pic.twitter.com/kZifTklX50

​Roads are already flooding and landslides are feared, with a total of 10 to 30 inches of rain expected through the weekend. Civil defense on the Big Island reported early Thursday on Twitter that landslides had already blocked Route 19 on the northern tip of the island.

​Store shelves have emptied of all essentials and residents have boarded up their windows and topped off their generator fuel tanks.

"[I'm] filling up my bathtub with some water, hoping to board up my main windows in time," a shopper on the Big Island, Shana Bartolome, told CNN affiliate KHON on Tuesday.

Heavy rain from Hurricane Lane continues to pound East Hawaii. A flash flood warning was extended for the area until 3:45 a.m. https://t.co/2Gi9qctpCA pic.twitter.com/OnHgVcI6Tu

​Elton Ushio, administrator of Kauai Emergency Management, told KHON: "We're still within the zone of uncertainty, so we still take the threat seriously, and it's still where we ask that residents and visitors alike do their utmost to be prepared, have emergency kits, have a plan."

Volunteers are needed statewide in preparation for Hurricane Lane! The Red Cross is seeking volunteers who are willing to be on-call to potentially assist in staffing shelters or assessing damage. Training will be provided. https://t.co/zVGrjwqgKl pic.twitter.com/Omg9vp9cY7

​But as residents sought shelter, news emerged that there weren't enough shelters for everybody.

At a news conference Tuesday, Hawaii State Emergency Management Administrator Tom Travis said plainly: "We do not have enough shelters for everyone."

"It's obvious there aren't enough shelters," Brig. Gen. Moses Kaoiwi, director of joint staff of the Hawaii National Guard, told Hawaii News Now. "If you have a home you can shelter in, it's probably better to stay at home."

Check out this Hawaii footage from a resident already seeing flooding on their streets as Hurricane Lane tracks towards the islands. The National Weather Service has issued a flash flood warning for the area, where some regions can see upwards of a foot of rain. pic.twitter.com/pJdOirIpDl

​The 15 airports throughout the state will remain open as long they don't suffer damage to their infrastructure and no debris "makes flight operations unsafe," the Hawaii Department of Transportation said in a statement Thursday.

The airports, especially in Honolulu, are clogged with hundreds of travelers fleeing the storm.

The islands are 2,500 miles from the nearest mainland.

​The cyclone is expected to veer to the west and weaken to a Category 1 storm by late Friday, but even then, the forecast is uncertain, and the storm would still have at least 74 mph winds.