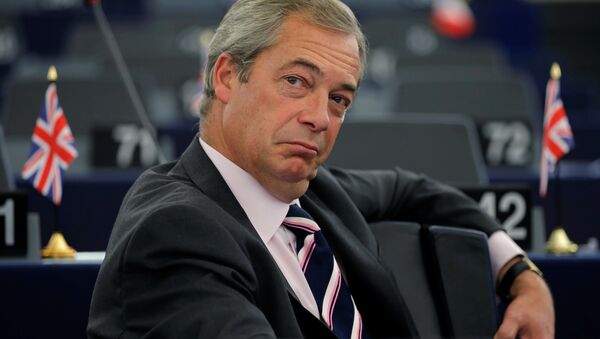 Former leader of the UK Independence Party (UKIP) Nigel Farage has long campaigned for Britain to leave the European Union, and is now fighting off an attempt which could see the UK remain in the trading bloc.

Nigel Farage once again expressed his opposition to a second Brexit referendum on Tuesday, saying it would be “the Soros vote” not the people’s vote.

He said the British electorate has already indicated it wants to leave the EU, via the 2016 referendum, suggesting a fresh vote would be counterproductive.

"You can argue all you want for your People's Vote by the way, we had the people's vote. It's not the people's vote, it is the George Soros vote is how I would put it,” Farage, who continues to serve as an MEP after standing down as UKIP leader, said on LBC’s radio show.

Brits took to Twitter to voice their opinions, with some agreeing with Farage, while others insisted that a second vote is the most democratic option.

Globalist billionaire George Soros has repeatedly been accused of attempting to meddle in Britain’s withdrawal from the EU, seeking to keep the UK in the union.

Billionaire Soros Announces Launch of New Anti-Brexit Crusade in 'Next Few Days'
In a bid to halt Brexit, Soros has donated hundreds of thousands of pounds to pro-EU campaigning groups, including the Best for Britain group, which has heavily campaigned for a second referendum to be held.

Moreover, Soros has allegedly meddled in the internal affairs of other European countries to bolster the EU and further his pro-migrant agenda. The Hungarian government has been especially critical of his political activity, accusing him of hiring over 2,000 people to meddle in the country’s elections earlier this year.