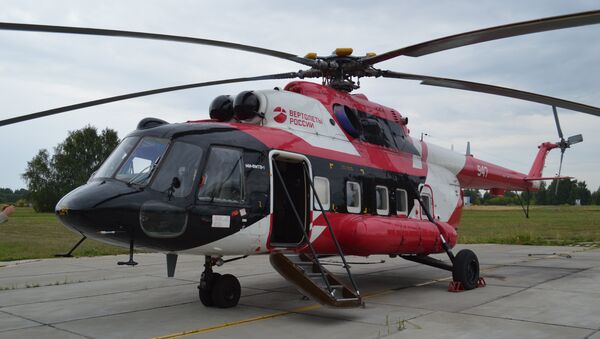 Russia’s newest military gear is on display at the Army 2018 International Military and Technical forum in the Patriot Park near Moscow. Russian Helicopters – a part of the tech giant Rostec, brought its latest models to the show and opened the doors of its plant in Kazan to show Sputnik how the helicopters are built.

The 12-ton Mi-28NE "Night Hunter" is truly a flying fortress. Its ceramic-plated capsule is capable of protecting the pilots against armor-piercing machine gun rounds and the helicopter's seats are designed to save the crew even during tough crash landings with vertical speeds of up to 10 meters per second.

The Mi-28NE is one of several modernized machines that are on display at the Russian Helicopters zone of the Army 2018 forum.

Right next to the military gunships is the police version of Ansat — the prototype designed for law enforcement agencies. Its optical systems can provide video surveillance and object recognition at distances of up to 5 kilometers.

This is the police version of Ansat on display at Army-2018. Similar twin-engine model just passed high-altitude testing in Karachay-Cherkessia, in Southern Russia, which included simulated engine failures, take-off, flights and landings in the mountains. pic.twitter.com/fiLCFLiRPt

Ansat is being built at Tatarstan's Kazan Helicopters plant and it's currently the youngest of "the holy trinity" assembled here, which also includes the acclaimed Mi-8/Mi-17 and "the heavyweight" Mi-38, which is capable of lifting 15 tons of cargo.

In July this year, a Kazan-built Mi-17 was used in the cave rescue operation in Thailand.

The plant's deputy chief technologist Konstantin Lazutkin told Sputnik that in terms of technology Ansat is a few steps ahead of the plant's older models:

"This machine is very different from its predecessors. It's much more advanced than the Mi-8 and the fact that it's more "digitized" makes a big difference as well because the logistics of the assembly line and the building of mathematical models are much easier in that case."

4 new shops were built at the Kazan plant to implement more composite materials. Up to 80% of the new Ansats will be made using these materials, which make the helicopter lighter and capable of carrying more cargo pic.twitter.com/jH9Ito1VmL

It takes 35 days for Kazan plant workers to assemble a Mi-8, and only 3 weeks to build an Ansat. Usually, there is just one group of "parents" for each flying machine: at the final assembly stage all processes are being handled by crews of about 25 workers. Each person is an expert in one or several fields, and if someone is growing tired of performing one task, like assembling the helicopter's "nervous system" — the wiring, he, or she can undergo training and switch to other processes.

The average age of the staff at Kazan Helicopters is about 42-45 years, 50% are women. pic.twitter.com/XARltAEctT

Even though 95% of helicopters produced in Kazan are currently being made for Russian clients, the other 5% will be exported, and half of them will be Ansats.

Expanding into international markets is part of Russian Helicopters' strategy — said the company's CEO Andrey Boginsky in an exclusive Sputnik interview at the Army 2018 forum:

Russian Helicopters Holding Company is a subsidiary of the State Corporation Rostec, which was established in 2007. Rostec brings together 14 holding companies that make high-tech military and civilian products.

The Army 2018 International Military and Technical forum is being held in the outskirts of the Russian capital. On its opening day it's an experts-only event, but it will be open for public from August 22nd to August 26th.