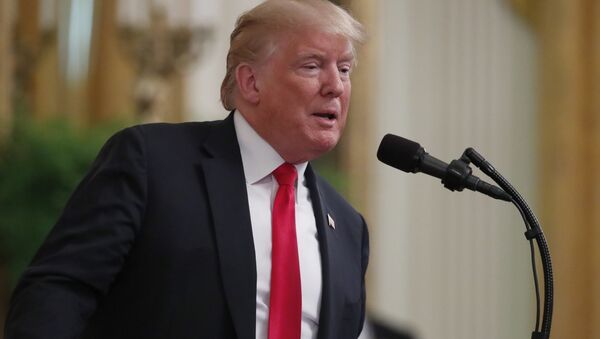 The New Yorker magazine has reported that Trump's advisers urged to nix Obama's access to the briefings in 2017. The news broke amid a bitter security row in the US, sparked by Trump's decision to revoke former CIA chief Brennan's security clearance last week.

In his latest online tirade aimed at "fake news," Donald Trump took to Twitter to blast reports that he had "discussed or thought of" cutting off his predecessor Barack Obama access to intelligence briefings.

Fake News, of which there is soooo much (this time the very tired New Yorker) falsely reported that I was going to take the extraordinary step of denying Intelligence Briefings to President Obama. Never discussed or thought of!

His tweet comes in response to Monday's article in The New Yorker, which alleged that Trump's associates agitated for revoking the security clearances of ex-US President Obama's officials in 2017, while some of them called for denying Obama access to intelligence briefings. The idea, however, was repulsed by then National Security Advisor Herbert Raymond McMaster and wasn't put into practice.

Even James Clapper has admonished John Brennan for having gone totally off the rails. Maybe Clapper is being nice to me so he doesn’t lose his Security Clearance for lying to Congress!

Trump stripped Brennan, a fierce critic of the US President, of his security clearance last week, citing his "erratic conduct and behavior." The latter called Trump's decision a politically motivated step and threatened to take legal action.

Just watched former Intelligence Official Phillip Mudd become totally unglued and weird while debating wonderful @PARISDENNARD over Brennan’s Security Clearance. Dennard destroyed him but Mudd is in no mental condition to have such a Clearance. Should be REVOKED? @seanhannity

The revocation of Brennan's security clearance has sparked a backlash in the American intelligence community. As many as 175 former US-spy officials protested against Donald Trump's move, advocating the right to express their unclassified views; their statement echoed the outcry of 12 ex-CIA directors, who condemned Trump's move as an "attempt to stifle free speech."