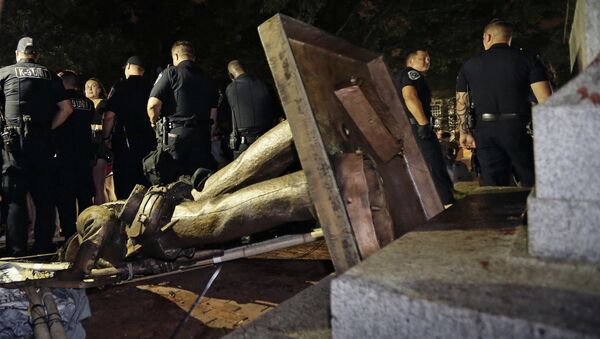 © AP Photo / Gerry Broome
Subscribe
International
India
Africa
The protesters who knocked down the statue decried it as a symbol of a controversial chapter in US history. The forcible destruction stirred controversy online, with some people calling the demonstrators "uneducated fools" and others praising them as revolutionists.

On videos posted online, hundreds of protesters can be seen yanking down a longstanding Confederate statue known as "Silent Sam" on the University of North Carolina's campus on Monday night.

According to media reports, the rally split into two groups. The bigger one marched away from the statue to distract the police, while the smaller one concealed the efforts to tie a rope around the monument with banners on bamboo poles. Then the demonstrators came together and pulled the monument down from its stone pedestal.

A university official condemned the actions while admitting that the monument has fueled controversy. "The monument has been divisive for years, and its presence has been a source of frustration for many people not only on our campus but throughout the community," she said in a statement on Tuesday. "However, last night's actions were unlawful and dangerous, and we are very fortunate that no one was injured."

Opinions on the incident have divided among the public. Some Twitter users have criticized it as vandalism, which has nothing to do with social justice.

Poor little snowflakes. Has nothing with the statue they just want to wreck property. Stop babying these brats.

They Should ALL be Expelled From School n Charged

Disgusting cultural/heritage/history vandalism by the young ignorants — whose university education should teach them to know better but obviously doesn’t.

This felony crime has nothing to do with social justice. It has everything to do will narcissism, instant gratification, destruction, lawlessness, and disorderly. Likely facilitated by someone elder to the students pushing an agenda. These kids are foolish pawns. #MAGA.

Others excused it as an "act of desperation" following decades of neglect.

I do not support acts of vandalism. This, however, was an act of outrage, indignation and desperation due to your decades of inaction and lack of concern! Sometimes to save the baby you have to break the car window!

Good for them. If the University refused to do anything about a monument to celebrate racism, then the people took the power into their own hands.

"Silent Sam" is a bronze figure of a Confederate soldier, which was erected on the campus in 1913. Many students have slammed it as a racist image, in large part due to its dedication speech by North Carolina industrialist Julian Carr, who praised the Confederate Army, whose "courage and steadfastness saved the very life of the Anglo Saxon race in the South."