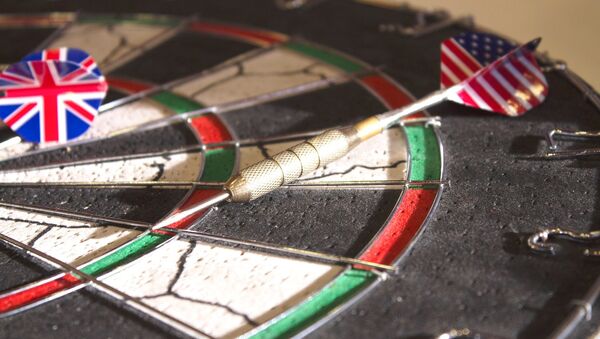 "As for Britain's actions, I heard the statement by the new UK foreign secretary, who, as far as I understand, is heading to Washington and announced that he will be convincing Donald Trump to toughen sanctions against the Russian Federation. He is promoting the same thing in relations with Europeans, demanding they further toughen sanctions, referring to the incident in Salisbury, which has not been investigated yet," Lavrov said.

Russian Envoy to UK: Moscow Wants to Help in Salisbury Probe, Waits for Evidence
"When the minister was asked if there was any progress in establishing the suspects, he did not know what to tell his own journalists. Certainly, our British colleagues have high self-importance: a country leaving the European Union in the framework of Brexit is seeking to dictate foreign policy to the EU itself. Now, it turns out, London wants to dictate foreign policy on the Russian direction in Washington as well," he said.

UK Foreign Secretary Jeremy Hunt, speaking Tuesday at the US Institute of Peace in Washington DC, will urge the European Union to expand sanctions against Russia over the Salisbury incident, according to excerpts from Hunt's speech obtained by Sputnik.

On Talks With Taliban

According to Lavrov, the Taliban representatives plan to take part in a meeting on Afghanistan in Moscow on September 4, though there will be no separate meeting between the representatives and Lavrov himself.

The Russian Foreign Minister said Tuesday that he couldn't even hypothetically imagine how Russia could use the Taliban in the fight against Daesh.

The Russian Foreign Ministry, in its turn, has denied the allegations by the Afghan ambassador in Russia that Moscow was planning to use the Taliban against militants Daesh militants in Afghanistan.

"We paid attention to the recent statement by the Ambassador of the Islamic Republic of Afghanistan in Moscow, Abdul Kochai, that the Russian Federation allegedly plans to use the Taliban Movement against the Islamic State in Afghanistan," the ministry said in a statement.

Taliban Accepts Invitation to Attend Reconciliation Talks in Moscow - Reports
"We would definitely like to state that the claims by the head of the Afghan diplomatic mission in Moscow are false and completely distort the meaning of the policy of the Russian Federation in regard to Afghanistan," the ministry stressed.

According to the statement, Moscow deeply regrets that the Afghan ambassador, instead of helping in every way to maintain an atmosphere of partnership and mutual trust between Russia and Afghanistan, takes steps that lead to the opposite result.