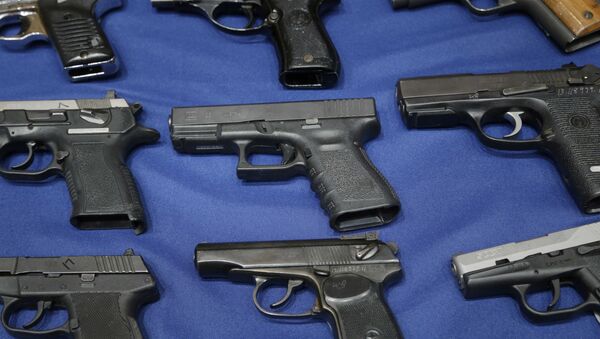 © AP Photo / Seth Wenig
Subscribe
Israeli authorities have eased restrictions on the country’s firearm ownership legislation, potentially allowing hundreds of thousands of armed forces veterans and police volunteers to carry guns without proving the need to do so.

New changes in gun licensing rules recently approved by Israel’s Minister of Public Security Gilad Erdan are expected to allow about 600,000 Israelis to obtain a firearm permit, The Times of Israel reports.

Under the old rules, only Israelis who could prove that they need a weapon – like people living or working in an area considered dangerous – were eligible to obtain a firearm permit.

Thousands Protest Israeli Bill at Arab-Led Rally in Tel Aviv
The new legislation, however, will allow people who served in Israeli Defense Forces combat roles, as well as all commissioned lieutenant officers and non-commissioned master sergeant officers, to get a gun license.

Volunteers in certain police units and medical organizations will also be eligible to receive gun permits, the newspaper adds.

Tamar Zandberg, chairwoman of the Meretz opposition party, criticized the new policy, arguing that firearms are “a death machine whose civilian use needs to be reduced as much as possible.”

"Instead of dealing with the tremendous amount of illegal weapons on the streets endangering human lives, they are simply increasing the number of gun permits," she said in a statement.

Erdan, however, claimed that "qualified citizens carrying firearms in public contribute to the sense of security," adding that the initiative should help deal with so-called "lone-wolf attacks" carried out by individual perpetrators rather than by organized terrorist groups.

"Many citizens have saved lives during terror attacks, and in the era of ‘lone-wolf’ attacks, the more qualified gun-carrying citizens there are — the better the chance to thwart terror attacks without casualties and reduce the number of casualties," Erdan declared.